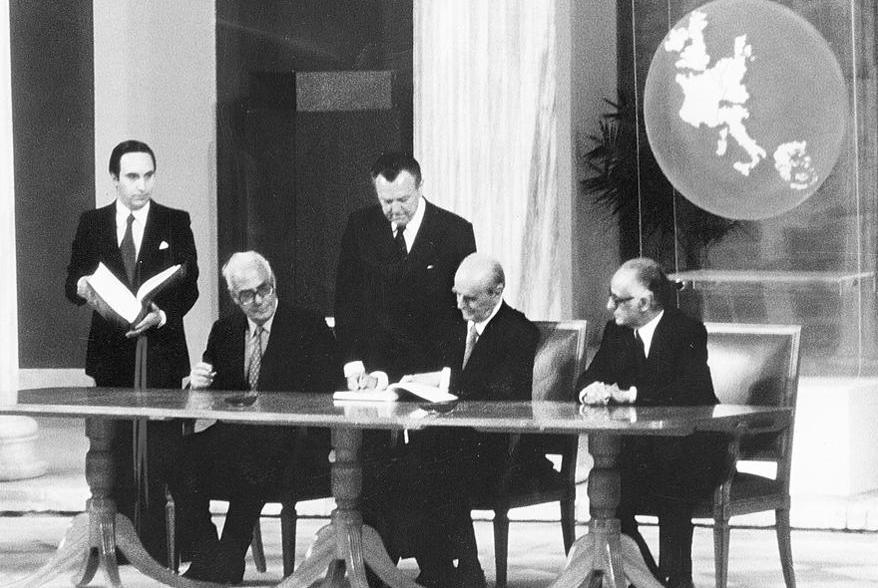 Forty years ago, on January 1, 1981, Greece made a huge leap forward by joining Europe by joining the European Economic Community.

Greece sought to join the European family long before signing the official membership agreement on May 28, 1979.

European identity was crucial for the country after its emergence from the distress of the German occupation and the bloody civil war.

In fact, Greece applied to be part of the newly created European Economic Community in June 1959, a request which led to the Association Agreement between Greece and the EEC, signed in June 1961.

However, this agreement, which was in fact the first step towards the integration of Greece into the European Community, “froze” when the colonels took power in April 1967.

Membership procedures were reactivated after the restoration of democracy in July 1974. The Greek government and Constantinos Karamanlis in particular aimed to integrate the country into the European Union as a full member.

Indeed, the full membership application was presented on July 12, 1975, by means of a letter addressed to the then President of the Ministerial Council of the European Union and Minister for Foreign Affairs of Ireland, G. Fitzgerald .

Greece had several reasons for being part of the European “family” at large. Besides the obvious advantages to the Greek economy, being part of the EEC would provide the institutional framework within which stability could be introduced into its political system and democratic institutions.

Another reason was the strengthening of the independence and the position of Greece within the regional and international system as well as its “negotiating power”, in particular vis-Ã -vis Turkey, which after the invasion and the occupation of Cyprus (July 1974), appeared as a threat against Greece.

In addition, Greece’s accession to the EEC would contribute to the development and modernization of the Greek economy and society.

The accession negotiations were initiated in July 1976 and concluded in May 1979, with the signing of the Act of Accession in Athens (Zappeion Megaron). The Greek Parliament ratified the act of accession of Greece to the European Community on June 28, 1979.

In March 1982 Greece presented a memorandum requesting additional economic support in order to restructure the Greek economy. The European Commission responded to the demand through the Integrated Mediterranean Programs (IMPs) approved in 1985.

The significance of the PMIs was far greater than the additional funds that were approved for Greece, as they introduced, on behalf of the European Union, a structural policy development effort shaped in 1988 with the New Structural Policy , by means of the first “Delors Package.”

While at first Greece was reluctant to follow the model of European integration, especially in areas such as the role of institutions, politics and defense, but from 1988 Greece started to support the â€œfederalâ€ model of integration as well as the development of policy in new areas (education, health and environment), the strengthening of supranational institutions (Commission, Parliament) and the development of a common foreign and security policy through The union.

In addition, from 1987 Greece began to project Cyprus’s accession to the European Community as its main objective. To this end, Greece supported the government of Nicosia in its application for membership, submitted in June 1990.

From 1996, under the leadership of Costas Simitis, the idea and process of European integration received further support, deepening integration in all sectors, in accordance with the federal model.

Greece was among the member states supporting the adoption of a European Constitution. When this attempt failed, Greece welcomed the inclusion of the major institutional innovations foreseen in the Treaty establishing a Constitution for Europe (TEC) in the Treaty of Lisbon.

An effort for greater economic and social convergence with respect for the â€œconvergence criteriaâ€ set by the Maastricht Treaty and the participation of Greece as a full member of the Economic and Monetary Union (EMU) as well as the adoption of the single currency (euro) on January 1, 2002.

Besides the deepening of the EU, Greece has been a strong supporter of the enlargement of the Union. Greece also supports the accession of the countries of Eastern Europe to the Union, despite general hesitation.

The fourth Hellenic EU presidency (first half of 2003) was a success for Greece and it was during this presidency that the European Union experienced the biggest wave of enlargement in its history (10 new states members).

The fifth Hellenic Presidency (first half of 2014) took place amid the worst economic and social crisis in recent European Union history.

However, it has been a success both in terms of quantity and quality. Indeed, 71 legislative texts have been adopted mainly in areas of major importance for the daily life of European citizens (growth, employment, further integration of the EU and the euro zone, migration and maritime policies).

In recent years, the political divisions caused by the economic crisis have made many Greeks doubt the European Union and the common currency bloc. Opinion polls between 2010 and 2015 showed that the majority of Greeks wanted to stay in the eurozone, but at the same time believed that the austerity policies imposed by the country’s European creditors were too harsh.