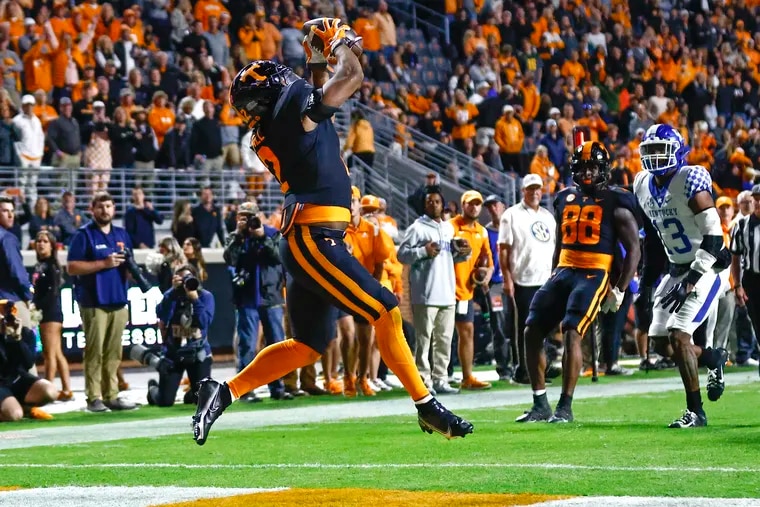 The odds of having a 1-on-2 game increase if there are two No. 2s in the Associated Press college football poll.

Tennessee and Ohio State were tied for No. 2 on Sunday in the AP Top 25 presented by Regions Bank.

Georgia remained No. 1, setting up a 1-2 showdown on Saturday in Athens between the defending national champions Bulldogs and the upstart Volunteers, who started the season unseeded and are now striving to be No. 1.

The 28-point margin between the No. 1 and No. 2 when they play is tied for the seventh-smallest among the 53 games corresponding to APs 1 and 2. Georgia-Tennessee will be the 25th of those played in the regular season .

The thinnest margin between the top two teams in the country at the time they played came in the last game 1-2. The No. 1 LSU was seven polling points ahead of the No. 2 Alabama before the Tigers beat the Tide 46-41 in 2019.

Reality Check has been calling for Tennessee to be No. 2 for a few weeks and is glad voters have caught up.

The rest of the standings changed little in the top 10 and not badly thereafter, including three teams making their season debuts.

Next: against No. 2 Tennessee, Saturday.

Reality check: The absence of WR Adonai Mitchell (ankle) for most of the season has limited the Bulldogs’ passing game, but having two tight ends in Brock Bowers and Darnell Washington averaging over 17 yards per plug is a good way to mask any problem. .

Reality check: DL Byron Young and the Vols defense played their best game of the season against Kentucky, giving up 3.25 yards per play. Can they hold up against Georgia?

Ranked: We might wonder if Tennessee should be No. 1 or just wait a week.

Next: at Northwestern, Saturday.

Reality check: Buckeyes have rushed for 164 yards on 56 carries (2.93 per attempt) the past two weeks against Iowa and Penn State, and the status of second rusher Miyan Williams (arm) is unclear after his departure from Saturday’s game. That type of production won’t work against Michigan.

Next: at Rutgers, Saturday.

Reality check: The Wolverines have had to settle for seven field goals in 12 trips to the red zone over the past two games against Penn State and Michigan State. This type of production will not work against Ohio State.

Next: at Notre Dame, Saturday.

Back to reality: if you want to play the game of transitive property, Notre Dame had an easier time in Syracuse than the Tigers did with Orange in Death Valley. But it’s a bit of a stupid game.

Reality check: How do you know when Alabama is fighting? The Crimson Tide feeds RB Jahmyr Gibbs, who has 63 of his 98 runs in games against Arkansas, Texas A&M and Tennessee. Guess he’ll be busy for the next few weeks.

Next: against Texas Tech, Saturday.

Reality check: The Horned Frogs have trailed in the second quarter of each of their last four games. Sonny Dykes’ team lived well.

Next: in Colorado, Saturday.

Next: vs. California, Saturday.

Back to reality: Trojans have committed the lowest turnover in the country and a completely unsustainable number in the future.

Next: at Arizona State on Saturday.

Reality check: The Bruins’ first 10-win regular season since 1998 is very close if they can avoid tripping against the soft bottom of the Pac-12.

Reality check: The defense appears to be in freefall, having allowed more than 6.50 yards per play in each of the past three games — including against otherwise sputtered Auburn and Texas A&M.

Next: vs. Arizona, Saturday.

Reality check: The tight-end dependent Utes have already lost Brant Kuithe and now have to worry about Dalton Kincaid’s condition after he left the Washington State game with an apparent chest injury. the shoulder.

Next: vs. Texas, Saturday.

Reality check: The Wildcats’ pass defense has been about as good as it gets in the Big 12, leading the conference with 23 sacks and making things especially tough for the less experienced quarterbacks they’ve faced — and Oklahoma State’s Spencer Sanders.

Next: vs. Michigan State, Saturday.

Reality check: The best defensive numbers in the nation have come up against pretty anemic offenses and reserve quarterbacks, but the Illini have been dominant and there are still a few top tests left (Purdue and Michigan).

Reality check: It’s been a quiet season for talented WR Kayshon Boutte with a 100-yard receiving game. The Tigers could use a late-season push.

Next: in Indiana, Saturday.

Reality check: Can the Nittany Lions aim for an achievable 10-win season while securing playing reps for promising rookie QB Drew Allar? Something to watch now that the Big Ten title hopes are gone.

Next: in Virginia, Saturday.

Back to reality: the defense has improved a bit. Maybe. Thing is, that won’t stop the Tar Heels from advancing to the ACC title game thanks to QB Drake Maye, who also gives them a chance to win.

Reality check: The Cowboys suffered the most lopsided loss in Mike Gundy’s 18-year tenure as coach on Saturday. They’ve been really stoned lately, but it was such a bad performance it’s hard to fathom.

Next: in Tulsa, Saturday.

Reality check: A week off combined with a bunch of teams crashing around them in the standings propelled the green wave into the top 20. Timing is everything in life.

Ranked: An argument could be made, they belong ahead of the K-State team they beat.

Next: at North Carolina State’s No. 21 on Saturday.

Reality check: The Demon Deacons had more third-quarter turnovers against Louisville (six) than in their first seven games combined (five).

Back to reality: Wolfpack might have something in QB MJ Morris. Can the freshman salvage a promising season?

Next: in Pittsburgh, Saturday.

Back to reality: Even at 6-0, we warned you that Orange could have difficult times with a busy schedule.

Ranked: At least ahead of NC State so far.

Next: in Arkansas, Saturday.

Reality check: Hugh Freeze has the Flames in position to be the best team in the state of Virginia. Not a real high bar to cross this season, but still.

Next: in Washington, Friday.

Reality check: The Beavers return to the standings after a nine-year absence, despite playing most of October without QB Chance Nolan (concussion). They tried to compensate by throwing the fewest passes in the Pac-12, with the most rushing second attempts.

Next: in Memphis, Saturday.

Reality check: A week after perhaps their worst performance of the season against East Carolina, the Knights were at their best against Cincinnati and are back in the standings for the first time in more than two years.

Follow Ralph D. Russo at https://twitter.com/ralphDrussoAP and listen at http://www.appodcasts.com