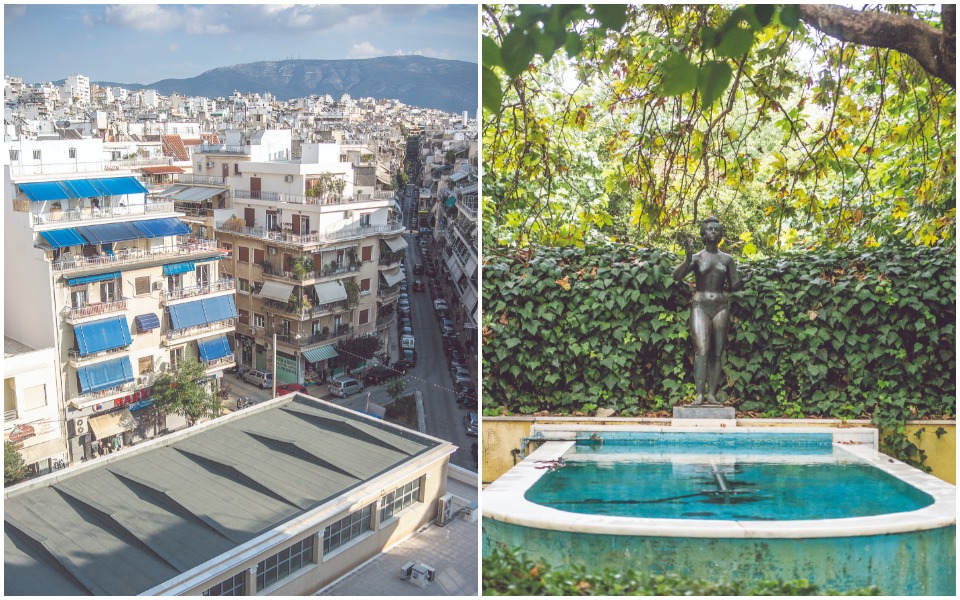 The Pedion tou Areos park to the south, the Tourkovounia hills to the east, the Galatsi and Alepotrypa hills to the north and Patission Street to the west: they form the limits of Kypseli, a district that was part of the countryside until that Athens became the capital of Greece in 1834. A century later it had acquired a number of outstanding neoclassical and eclectic buildings, but it was not until one of its streams, the Levidi, was recanalised underground and covered with a street called Fokionos Negri, which the district began to become properly Urban. Wealthy families began to buy or rent apartments in modern buildings that promised glamorous city living, but construction exploded after WWII when Kypseli was also swept away by the flood of immigration including dreamy rural Greeks of a better life in the capital. After that, Kypseli kept swelling.

Those of us who grew up there in the 1970s and 1980s saw evidence of this process in its streets, where the cliché was often heard: “Kypseli is the most densely populated part of the world after Hong Kong. It is true that there was something dystopian about our claustrophobic neighborhood, but so are many other parts of this hastily and haphazardly built city.

There were, however, small windows of fresh air. Fokionos Negri, for example, was constantly bubbling over with laughter, games, flirtations and discussions. These 750 meters or so from Kypseli’s main square to Patission Street were something like a human amusement park, vibrant with color and artistic energy. Cinemas, theaters and cultural spaces were everywhere – not to mention some of Athens’ most legendary restaurants and bars.

The other large window was Pedion tou Areos. Our school, the 60th Athens High School and College, was one of the area’s most powerful architectural symbols and was located halfway down Kypselis Street as it descended to the park. This gave the school a view of the greenery and the place where the sun was setting, bathing the narrow streets in an orange light for a few fleeting minutes. Here, on the western border of Kypseli, the Panellinios Sports Club was the only place in the city center where one could take tennis lessons outside the more island Athens Tennis Club or practice other more “popular” sports, such as boxing, wrestling or basketball, which became very popular very quickly in the 80s. Panellinios was the kind of place where tennis players and boxers got together, a coexistence that defined the human element in the neighborhood. The unbearable concrete and narrow streets of Kypseli have always represented a colorful celebration of multi-faceted city life.

Theft of the ancients

The promises of a life of clover sent Kypseli’s older residents running en masse to the northern suburbs in the early 1980s. This was followed in the 1990s by an influx of immigrants from the Eastern Bloc and then in the 2000s of Africa. Kypseli was struck off by many of his elders, but all these new people from different countries have managed to stick together.

Kypseli is back on his way these days. You could say that she is experiencing her third youth after that of the 1930s and 1960s. What explains the phenomenon and where is it going? One of those who grew up there but left years ago, this writer is unable to answer these questions. But four die-hard “Kypselites” we have spoken to are.

The author born and raised in Kypseli, Christos Chomenidis, recently published a book called “Tzimis in Kypseli”, whose protagonist is an impresario of the current Fokionos Negri. I ask if this reflects the recent popularity of the area. “The story could have been set in other Athenian neighborhoods, but it takes place in Kypseli because I know it better – I’ve lived here my whole life. But, you know, Tzimis runs a theater that puts on a low comedy, whereas the real Kypseli had a really good theater, ”he says.

Filmmaker Lefteris Charitos also remembers these theaters. “Kypseli has always been an artistic district because there were theaters and cinemas, and I’m not just talking about arthouse cinemas like Studio. I mean countless commercial theaters, inside and out, ”he comments.

“Places like the Select pastry shop were also cultural places. I used to go there on Sundays in the late 1970s with my dad and I remember feeling like I was doing something terribly important just by being there, ”he adds.

Select is also very present in the childhood memories of Chomenidis. “I remember several aunts sitting there eating chocolate cake,” he said.

“At the time, the neighborhood belonged to the upper middle class, but that started to change in the early 1980s. I remember waiting for the school bus from the College of Athens and the crowds were getting smaller. as families gradually moved to the northern suburbs, ”adds Chomenidis, referring to a well-known private school. “Kypseli declined, which inevitably meant he would start climbing again.”

Now that it is, what will happen?

“He has structural problems that don’t allow him to climb too high,” explains the award-winning writer. “It has narrow streets and sidewalks which often make walking scary. And because most apartment buildings are old, they don’t have heating or independent parking, which is more generally rare. So unless it’s demolished and rebuilt, I think it could turn into a young and arty neighborhood.

Young people were also drawn to Kypseli in the 1980s thanks to the neighborhood’s reputation for tolerance to alternative subcultures, similar to Exarchia.

Giorgos Fertakis owned Sonic Boom Records, a music store that existed from 1995 to 2013, first on Kypselis Street, then on Syrou. On a blog he wrote until recently, he recounted being alerted by a friend to the presence of legendary punk rock band The Ramones eating souvlaki at a local tavern after a concert in Athens in May 1989. . a lot of food and beers, ”he said.

His portrait of Kypseli is painted through the prism of his relationship to music. “I have entered countless local houses through my work, buying old records from private and family collections. I almost always came across very decent or even impressive collections. And this, I believe, is a sign of the locals and their cultivation. Kypseli’s relationship with music is also evidenced by the large number of record stores he had before – I’ve put at least 30, ”Fertakis told Kathimerini.

So, is it this presence of art and culture that made Kypseli such a melting pot, so tolerant of diversity?

“There has always been a feeling of freedom in Kypseli. You might go out wearing your pants inside out and not hear any noise, ”Charitos explains. “It was never associated with gossip, although there was a lot to talk about. “

Chomenidis agrees. “I used to go out in my pajamas to buy cigarettes at the convenience store and no one would blink,” he says.

Why? “Probably because the inhabitants of the district were bourgeois enough not to have any prejudices”, he replies. I can’t help but wonder why he thinks this is not also the case in Kolonaki, another of Athens’ preeminent middle-class neighborhoods. “The difference between Kypseli and Kolonaki is that the residents of the first don’t care, while in the second they would think you’re trying to make a point,” is her delightful response.

In search of a new identity

Michalis Papadakis has also remained loyal to the neighborhood during bad times and, being in real estate, he knows Kypseli as well as he loves him. “Kypseli is still alive, never stagnant. And, as a resident, if you want to stay active, you need to keep up with these changes and transitions. Now, it is requested for a new identity, but I do not know if the papers passed by there ”, he jokes. “What I know is that it’s changing. New pieces are added to the puzzle. I saw this a few years ago when the first “displaced” people appeared, internal migrants in the city, young people who lived in other neighborhoods (Koukaki, Ilias, Neapoli and Exarchia), where their owners have moved. decided to turn their properties into hotels. Most had spent a few years abroad and were comfortable with cultural diversity and keen to experience something new. The first chapters are already written. Now we look forward to the next ones, ”he adds.