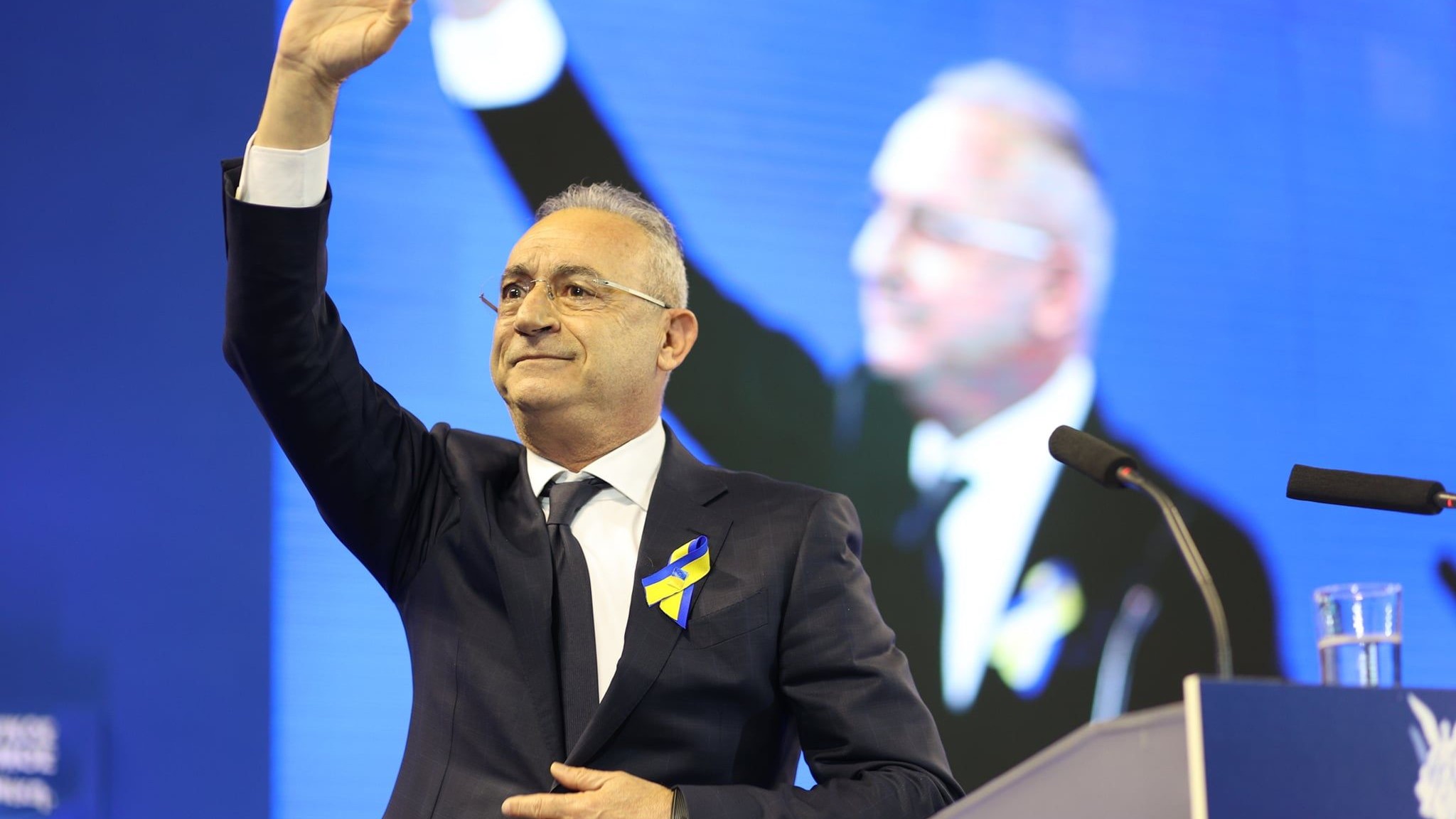 The leader of the Cypriot Democratic Rally (Disy) party and presidential candidate, Averof Neophytou, expressed his warm thanks to Greek Cypriots in Australia in an exclusive interview with The Greek Herald.

Nearly eight months before the elections in Cyprus, which will mark the end of Nicos Anastasiades’ successful tenure as the country’s president, Neophytou promises that we will “keep Cyprus proud and strong”.

Neophytou and former foreign minister Nikos Christodoulides will be the main presidential candidates in a race that is expected to be decided in February 2023.

Neophytou speaks fearlessly but with great passion for The Greek Herald on the political legacy of Nicos Anastasiades, his main opponent, Nikos Christodoulides, and his priorities if he is elected by the Cypriot people.

The main question we ask him is why Cypriot voters should trust him.

“Our country, like Europe and the Western world, faces enormous challenges and threats. Russia’s invasion of Ukraine radically changes the post-war security system, accelerates developments and leads our country to make decisions that will determine its future,” Neophytou said.

“At the same time, this triggers a series of crises: inflation, food and energy crises are here and will remain so for a long time. Russia’s move encourages Turkish revisionism and aggression in Cyprus and Greece.

“We have a minefield ahead of us. Our country must come out of this safely. It takes experience, skills, a team, a program and alliances.

“Our adversaries have none of this. Only our proposal, based on the solid foundations of the Democratic Rally, has the ability to transfer society safely to a Cyprus of the future. Building on our strength and in cooperation with Greece and our partners in the European Union.

“Governing a country when you have a minefield in front of you is not public relations. We have proven that we can manage crises and move our country forward. We did it in 2013 with reliable management to move from financial bankruptcy to recovery, we proved it with the management of the health crisis and we will do it now.

Anastasiades’ Legacy and Regression with Christodoulidis:

While the shadow of Nicos Anastasiades will fall heavily in the coming period for his successor as President of Cyprus, Neophytou values ​​his political legacy.

“The backdrop for the Cyprus of tomorrow are the good policies implemented over the past ten years by the Anastasiades administration, with the Democratic Rally government as a constant ally. The President of the Republic received a country on the verge of bankruptcy and almost ten years later delivered a modernized and strong country at all levels,” explains Néophytou.

“With prudent financial management, we have abandoned the memoranda, restored the country to investment grade and implemented an inspired reform agenda.

“This is the great legacy of Nicos Anastasiades. A tangible legacy that changed the country, as well as the sacrifices of the citizens, and which we don’t give to anyone and no one has the right to usurp.

According to the polls, the election will be a battle between Neophytou and Christodoulides. The former Minister of Foreign Affairs and close collaborator of Anastasiades decided to become independent from the Democratic Rally, creating conflicts on the political scene of the country.

“It will be a dangerous setback that will put our country out of the picture, just at a time when the country needs a clear line and a steady course, with our Western allies,” Neophytou said of the possibility that Christodoulides wins the election.

“Christodoulides is now officially DIKO’s candidate. Officially because the plan was decided months ago, the first day this man turned his back on the faction that raised and supported him.

“It is obvious with whom he intends to assert the governance of the country. It was a compromise. Christodoulides has a party, collaborators and a network of customers. What he must tell us is what commitments he has made on the “gifts” he has received.

“We will not allow Cyprus to return to the times when DIKO shared power with AKEL, to demolish everything that was built inside and outside the country, to bring society back to those times… where our first concern was the survival of our fellow citizens.”

The priorities of Neophytou and the Australian Cypriots:

In February 2023, Cypriots will vote for their new president. What will Neophytou’s priorities be in the event of an election?

“I have said it several times in public, I will repeat it now. Our top priority is to solve our national problem. We have before us a revisionist Turkey and we must all oppose its aspirations. Cyprus, Greece, Turkey European Union”, explains Neophytou.

“At the same time, we must, with all our strength and through constructive political proposals, remove the current stalemate and the obstacles put forward by Turkey. The liberation and reunification of our homeland, our common message which will come out with one voice from Cyprus, must be our common goal.

“At the same time, as I have already said, given the minefield we are facing, seriousness and a program are needed. First of all, we have the obligation, through the Recovery Fund and the 4.5 billion earmarked for the Republic of Cyprus, to continue and complete the reforms. Transform the country’s productive model, put into practice the green economy and the digital transition.

Finally, Neophytou does not fail to send a message to the very active Cypriot community of Australia, which constantly organizes events and functions to preserve its cultural heritage and is imbued with a desire to return to the ancestral land.

“The Australian Cypriot community, like Cypriots in all parts of the world, is the beacon whose brilliance reaches us every day. I know well the fight they are waging, the Thermopylae that they are taking away from their homeland that they love so much and prove it at every opportunity, ”he concludes.

“I thank them from the bottom of my heart for all they do for our Cyprus and I want to assure them of the following: we will keep Cyprus proud and strong, reliable and serious at all international levels, internally and abroad. outside the European Union.

“We will continue to make them proud because we know that the heart of Cyprus beats globally and is not geographically limited to the Eastern Mediterranean.

“We have rolled up our sleeves, not to let our country fall back into disrepute but to preserve what we have built and achieved with great effort and which Australian Cypriots know well.”