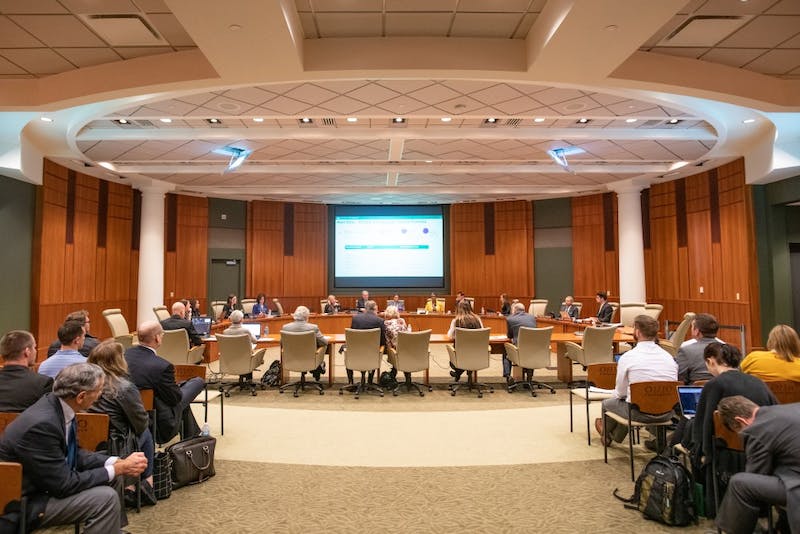 The Ohio University board met in committee and executive session on Thursday and discussed the appointment of its regional administrator as well as a new voluntary separation or retirement program, or VSRP. .

The Governance and Compensation Committee adopted a new resolution of the VSRP and amended the bylaws of the board to include a regional trustee.

The resolution is similar to the previous program, Sayrs said, as base salary will be paid over two years for those eligible for the program, along with an additional $ 20,000 for health benefits. Faculty members leading to tenure will be eligible, she said.

Colleen Bendl, director of human resources, added that by participating in the program, professors forfeit their re-employment rights at the OU in the future. Bendl said anyone in the program who is also eligible for retirement will be entitled to their sick leave pay as well as other retirement benefits.

Sayrs said the plan is to adopt the program in mid-January. She said professors could part ways with the plan at the end of the spring, summer and fall semesters.

“There are some departments where it takes a little longer to fill that faculty capacity,” Sayrs said. “We wanted to have that flexibility. “

The VSRP will be limited to departments in which tenure-track faculty endowment levels are not sustainable, Sayrs said.

After the presentation of the program, the resolution was adopted unanimously without discussion.

David Moore, secretary of the board, introduced an amendment to the statutes of the board to add a regional director without additional voting rights to the board for a three-year term. The motion was carried unanimously without discussion.

Crosby’s responsibilities as a regional administrator will include chairing the southeastern counties and representing those regions on the board of directors.

“She has played a leading role in developing health (and) broadband initiatives for the entire region, so we are very happy to nominate her name,” said Sherman.

The nomination was adopted without objection or discussion on the part of the Board.

The committee ended its meeting with a proposal to expand its current policy that allows members to participate remotely while counting for group voting. The new arrangement had some requirements, including the requirement for a roll call and directors notifying the board 48 hours in advance if they planned to attend virtually. This rule has been in effect since September 30 and allows two-thirds of directors to attend electronically.

As long as the administrator meets the defined parameters, they will be considered present, count as a quorum and have the right to vote, said Stacey Bennett, general counsel for OU.

Bennett said if the board decides to take advantage of this new ability, it could, but there are still some considerations to take into account. The Board will meet at a later date to decide whether or not to pursue this policy.

The Academics and Student Success Committee discussed its funding and research strategies at its meeting on Thursday.

Joseph Shields, vice president of research and creative activities, said he believes the most logical strategy going forward is “to build on established strengths and existing investments.”

Shields explained the importance of extramural funding to the university’s research efforts and stressed the importance of retaining this funding to support strong research programs. OR does this by connecting faculty and staff to funding opportunities, hosting grant writing workshops, assisting with writing, and gathering proposals.

Shields also explained how recent investments in physical infrastructure, such as the construction of Heritage Hall, the new chemistry building, and renovations to the Clippinger Laboratories, are aimed at helping research and education.

Later, Candace Boeninger, OU Vice President for Enrollment Management, informed the Board that the total enrollment of students enrolled at OU in 2021 was 28,770, or 1,639 less than in 2020.

Although the number is lower than last year, the cohort of freshmen for this year has increased by 17%. Of the first-year cohort, 589 are enrolled in the OHIO Honors Program.

The average GPA among the class of 2025 was 3.59, and 50% of those students were also ranked in the top 25% of their individual high school classes.

Boeninger showcased a joint effort of Honors Tutorial College, the Division of Student Affairs, the Marshal’s Office and a group of faculty members to provide a Scholars-in-Residence program at the OU. The program is called the 1804 Scholars Program and will have a strong emphasis on wellness, she said.

The Resources, Facilities and Affordability Committee sent five resolutions, which were subsequently approved, to the full board.

An outlook for the year was also presented to the committee by Senior Vice President of Finance and Administration Joe Trabacz, who said the university would most likely have a break-even year, mainly due to 27 million dollars in unused funds carried over from last year’s CARES Act. .

Additionally, Trabacz said he expects an overall reduction of $ 3.1 million used on COVID-19 spending than expected due to on-campus vaccination rates.

However, it was stressed during the meeting that the university is not financially stable with regard to the structural budget deficit in the future.

The portfolio reduction strategy has been shared, which is a comprehensive look at what land and buildings the OU owns and what the university is not using or is costing it money. Additionally, he reviewed options for the future of the properties, including sale and demolition.

The Ridges is one of the properties being considered for refurbishment or sale. Other properties the university is looking to sell or have potential buyers for are Lasher Hall, Haning Hall, Crewson House, the campus and community center and acres of Dysart Woods.

The university is also planning to demolish Scott Quad as part of its downsizing, citing major repairs and maintenance as well as a lack of need for use of the building. The plan is to bring it back to a more natural landscape in the area.

The strategy would cost the university around $ 13 million over 5 years. However, this would offset maintenance costs by around $ 20 million and reduce expenses by $ 1.5 million per year. The potential revenue from the strategy will be approximately $ 465,000 to approximately $ 1.02 million as of fiscal 2023.

Facilities Management Director Steve Wood provided the board with an update on the facilities projects the university has a budget of $ 366,008,297 for a total of 137 projects. Wood focused on six projects requiring board approval, which include system upgrades for The Convo, Gamertsfelder Hall toilets and air conditioning renovations, Scott Quad demolition, voltage transition from Ridges and the replacement of the degasser and a building-based heating system for Bromley Hall.

Project costs are budgeted at just under $ 32.5 million.

The council voted to approve the renaming of McCracken Hall, named temporarily after the OU’s first provost, to Gladys W. and David H. Patton Hall. The new name honors the parents of Violet Patton, a financial supporter of the Patton College of Education in OU, who were both educators in Ohio. The provost, dean, and board of trustees plan to find another location within the college to be named in McCracken’s honor.

A resolution moving forward with accepting a land grant from the daughters of President John C. Baker, Ann and Elizabeth, who inherited the land after her death, was also approved. The university hopes that the approximately 260-acre property, located 8 miles outside of Athens, will provide an opportunity for more research by students and faculty as well as use by members of the community.

Moderation of Growth Should Come as No Surprise Says Calamos