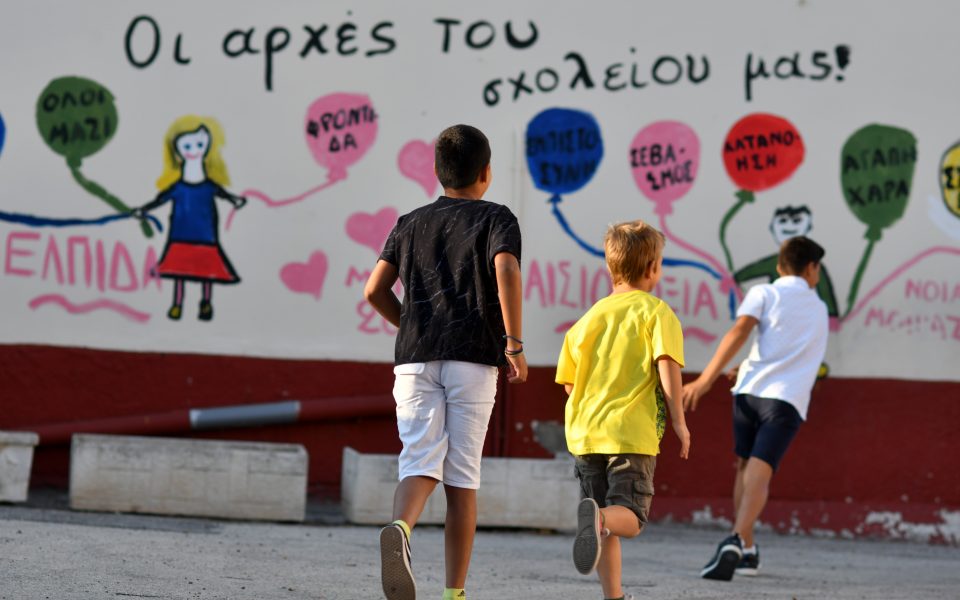 A total of 26,015 students born outside Greece attend Greek elementary and secondary schools. Children, aged between 5 and 17, represent around 2% of the total number of pupils in Greece.

The education system is trying to manage and integrate its foreign students, most of whom come from families who left their country in search of a better future. Many of them inevitably face difficulties due to being in a foreign country whose language they do not know. The online education imposed over the past two years due to the coronavirus pandemic has not facilitated their integration.

According to the latest data provided by the Ministry of Education, these students come from 94 countries. The vast majority come from neighboring countries, but there are also students – in isolated numbers – from countries such as Chile, the Dominican Republic, El Salvador, Rwanda, Senegal, Trinidad and Tobago and Vietnam.

The Attica region has the highest number of foreign students (10,220). But, according to a senior Ministry of Education official, “After mid-2020, new enrollment became more difficult as schools were full.”

Albanians represent the vast majority of foreign students; at the end of 2021, there were 15,532 Albanians in primary and secondary education, followed by students from Afghanistan (1,059), Georgia (600), Iraq (561) and Syria (481), reflecting more recent migration flows from the Middle East and Central Asia.

Since mid-2020, requests from Turkish parents to enroll their children in college have multiplied. According to an official from the Ministry of Education, these parents, who arrived in Greece with and without passports, are generally of a high economic and educational level and are considered by Turkey to be opponents of the regime.

At the same time, the number of African applicants has also increased. They are children of families who had migrated to Turkey and then joined refugees from Afghanistan, Syria and other countries by crossing the Aegean Sea to arrive on the Greek islands.

At the start of the 2020-21 school year, elementary schools in central Athens took in a disproportionate number of refugees after the catastrophic fire that engulfed the migrant camp on the island of Lesbos in September 2020. Although reconstruction began immediately, along with the construction of other facilities for migrants, large numbers of migrants moved to mainland Greece, most settling in the Athens area.

The large number of requests has strained school resources and the load has increased after the earthquake that hit the island of Samos in October 2020, which caused new movements of people and new requests for registration.

Officials say care is taken to distribute foreign students across all classes and not to create predominantly foreign classrooms where lack of language proficiency leads to delays in teaching the official curriculum. But, even then, some areas of Athens have a disproportionate number of foreigners, as it is in these areas that NGOs active in migrant resettlement choose to rent property.

Areas of concentration of foreign students include the neighborhoods around Patission Street, as well as the neighborhoods of Sepolia, Omonia, Exarchia, Kerameikos and Pangrati. There are also many requests on behalf of children from China and Egypt whose parents have been professionally active in Greece for years.

The coronavirus pandemic has introduced more obstacles to the integration of foreign students into the education system. Many children did not have the technical equipment to take online education or, if properly equipped, their parents did not have the knowledge or language skills to help them. The United Nations Children’s Fund (UNICEF), in cooperation with the Ministry of Education, translated the ministry’s instruction manual on synchronous and asynchronous distance learning into 11 languages ​​and dialects: English, French , Arabic, Turkish, Farsi, Pashto, Urdu, Amharic (official language of Ethiopia), Lingala (most widely spoken indigenous language in the Democratic Republic of Congo), Kurmanji (northern Kurdish) and Sorani (central Kurdish) .

Since the resumption of classes after the Christmas holidays, the Ministry has also launched a training program for teachers, “Inclusive Education – Support Program for Teachers in Teaching Children with Migrant/Refugee Background” . The program aims to improve teachers’ skills to interact with multilingual and multicultural learning environments and ultimately help international students stay in school and improve their performance.