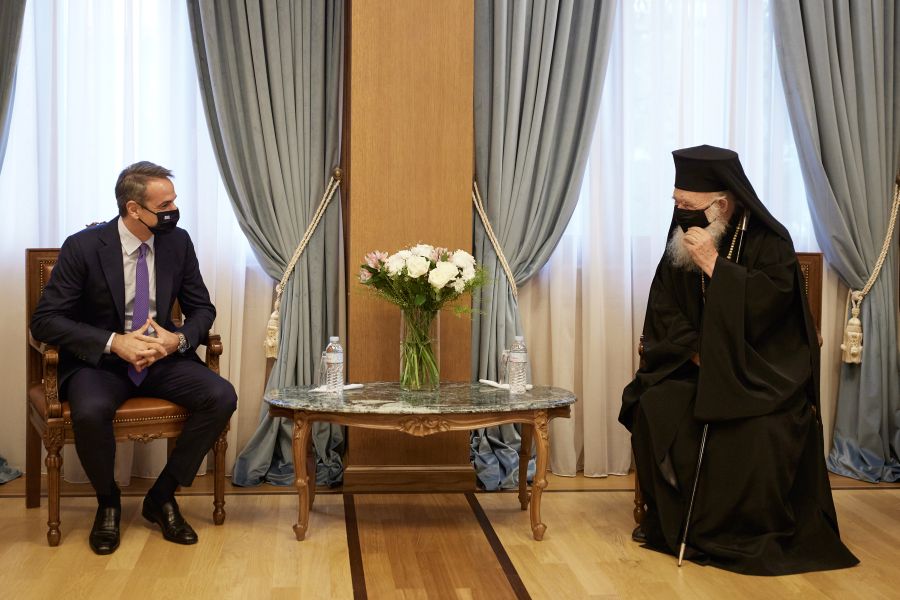 A united front of the government and the church in favor of universal immunization emerged after the meeting of the Holy Synod, in the presence for the first time of the Prime Minister, Kyriakos Mitsotakis and a woman, the Minister of Education Niki Kerameos. Kyriakos Mitsotakis and Bishop Ieronymos agreed that the measures must be observed without exceptions, but also that the State and the Church of Greece, always in the framework of their separate roles and responsibilities, face not only the pandemic, but also to those who instrumentalize it.

In a joint statement, the Prime Minister’s Press Office and the Holy Synod of the Church of Greece stress that the need for universal vaccination as well as compliance with measures in temples before Christmas was common ground between the two parts. “The State and the Church of Greece, always within the framework of their distinct roles and responsibilities, face not only the pandemic, but also those who instrumentalize, seeking or even inciting to tensions in the relations between the State and the Church, ”he added. said a joint statement.

Referring to the noise generated by the information concerning the additional recruitment of members of the clergy, Mr. Ieronymos underlined that “no additional recruitment, apart from the regular and planned recruitments annually, does not imply any form of permanence, and therefore no charge. supplementary budget “. The following is the joint announcement of the permanent Maximos-Holy Synod:

Today, Monday, December 13, 2021, the Permanent Holy Synod of the Church of Greece of the 165th synodal period met, under the chairmanship of His Beatitude the Archbishop of Athens and of all Greece Mr. Ieronymos . The historic visit of the Prime Minister Mr. Kyriakos Mitsotakis took place in an excellent atmosphere of cooperation, accompanied by the Minister of Education and Religions Mr. Niki Kerameos and the Deputy Minister to the Prime Minister and Government Spokesman Mr. Ioannis Economou.

After his speech, His Beatitude the Archbishop of Athens and all Greece Mr. Ieronymos presented the Prime Minister with the Commemorative Medal of the Holy Synod of the Church of Greece, of which he decided to commemorate the past two hundred years. since the start of the Greek Revolution.

A joint declaration by the Prime Minister and His Beatitude underlined the need to show particular attention and perseverance in the general effort of universal vaccination of the population, in particular in areas where vaccination coverage is low. . The importance of faithful observance of preventive and protective measures against the coronavirus has also been recognized. The State and the Church of Greece, still within the framework of their distinct roles and responsibilities, are confronted not only with the pandemic, but also with those who instrumentalize, seeking or even causing tensions in the relations between the State. and the Church.

His Beatitude thanked the Prime Minister and the Minister of Education and Religions for the sincere cooperation in solving the chronic problems, while he made particular reference to the great reform of ecclesiastical education. He raised the main questions on the one hand the use of ecclesiastical goods to support the charitable work and the contribution to the national recovery effort, on the other hand the legislative rationalization and the updating of the 1945 framework. , which concerns the clergy in our country. His Beatitude underlined that this does not entail any additional recruitment, apart from the regular and annually scheduled recruitments, of any form of permanence, and therefore no additional budgetary charge. The above questions have occupied the Church of Greece for a long time and obviously cannot be resolved in a meeting, but must be given careful and realistic study.

The Prime Minister warmly thanked His Beatitude for the very honorable invitation to attend the work of the permanent Holy Synod, reported on the important changes promoted by the current government so far to resolve the problems that plague the Church for many many years and congratulated the Saint for the support of the Church in the face of the pandemic. Finally, he reiterated his intention to start a dialogue on the aforementioned issues, focusing on social cohesion, fiscal discipline and transparency.

The Minister of Education and Worship referred to the confirmation of the relationship of trust between the State and the Church and thanked the permanent Holy Synod for the fruitful cooperation.