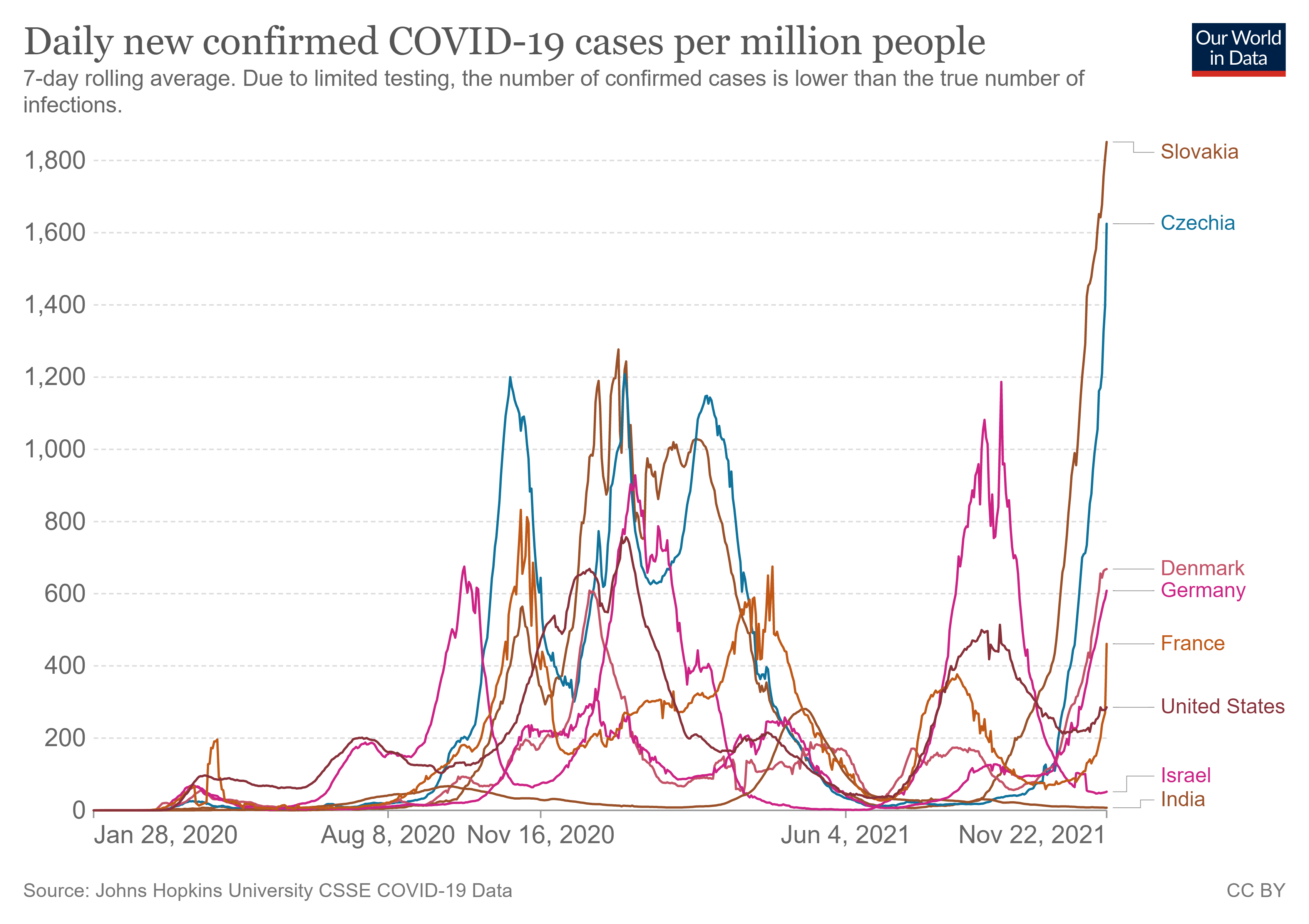 1. How COVID-19 is affecting the world

Pfizer says its COVID-19 vaccine provided strong long-term protection against the virus in an advanced study of adolescents aged 12 to 15. A two-dose series of the vaccine was 100% effective against COVID-19, measured between seven days and more than four months after the second dose, the company said.

Israel began rolling out Pfizer / BioNtech COVID-19 vaccines to children ages 5 to 11 on Monday, hoping to defeat a recent surge in coronavirus infections. A fourth wave of infections that hit Israel in June began to decline in September, but infection rates are rising again.

The Czech Republic and Slovakia have banned unvaccinated people from hotels, pubs, hairdressers and most public events from Monday after cases of COVID-19 filled intensive care units in hospitals, the Most critically ill patients who have not been vaccinated.

India reported 7,579 new coronavirus infections on Tuesday, the smallest increase in a year and a half despite huge festival gatherings in recent weeks, thanks to increases in vaccinations and antibodies from previous infections. The country of 1.35 billion people celebrated Durga Puja in October and Diwali this month, during which millions of people shopped, traveled and met their families.

2. United States issues COVID-19 “Do not travel” warning for Germany and Denmark

The US Centers for Disease Control and Prevention (CDC) and the State Department on Monday advised against travel to Germany and Denmark due to a growing number of COVID-19 cases in those countries.

The CDC raised its travel recommendation to “Level four: very high” for the two European countries, telling Americans they should avoid traveling there, while the State Department has issued parallel “Ne not travel â€for both countries.

The CDC currently lists around 75 destinations worldwide at level four, with many European countries on the list including Austria, Great Britain, Belgium, Greece, Norway, Switzerland, Romania, Ireland and the Czech Republic.

German Chancellor Angela Merkel told leaders of her Conservative Party that the measures taken to stop the spread of the coronavirus in Europe’s largest economy were insufficient and that stronger measures must be taken.

The number of cases in Germany has skyrocketed, especially among the elderly whose first two injections of the COVID-19 vaccine took place earlier this year, and among children who are not eligible for vaccination.

Earlier this month, the World Health Organization (WHO) said European countries must redouble their efforts to prevent the coronavirus from spreading further as deaths and new cases rise.

Current transmission rates in 53 European countries are a “serious concern” and new cases are approaching record levels, exacerbated by the more transmissible Delta variant of the virus, warned Hans Kluge of the WHO. â€œWe need to change our tactics, to react to outbreaks of COVID-19, to prevent them from happening in the first place,â€ he said.

3. The world must support the WHO and accept a treaty on the pandemic, according to a group of experts

The World Health Organization (WHO) must be strengthened with more funding and greater capacity to investigate pandemics thanks to a new treaty, an independent panel said, ahead of a conference of health ministers this week. next.

Efforts to end the COVID-19 pandemic have been patchy and fragmented, marked by limited access to vaccines in low-income countries while “healthy and rich” in rich countries receive reminders, experts said high level in their last exam.

The co-chairs of the panel, former New Zealand Prime Minister Helen Clark and former Liberian President Ellen Johnson Sirleaf, reiterated a call for urgent reforms. These included new funding of at least $ 10 billion per year for pandemic preparedness and negotiations on a global pandemic treaty.

In May, the panel assessed how WHO and member countries had handled the pandemic, and said a new global response system should be put in place to ensure that no future virus can cause such a devastating pandemic. .

“There is progress, but it is not fast or cohesive enough to end this pandemic across the world in the short term, or to prevent another,” the panel said in the report.

More than 257 million people are believed to have been infected with the SARS-CoV2 coronavirus and 5.4 million have died since the first cases were identified in central China in December 2019, according to a Reuters tally.

“Strengthening the authority and independence of WHO and developing new legal instruments are essential to the package of reforms required,” the panel said.

The views expressed in this article are those of the author alone and not of the World Economic Forum.