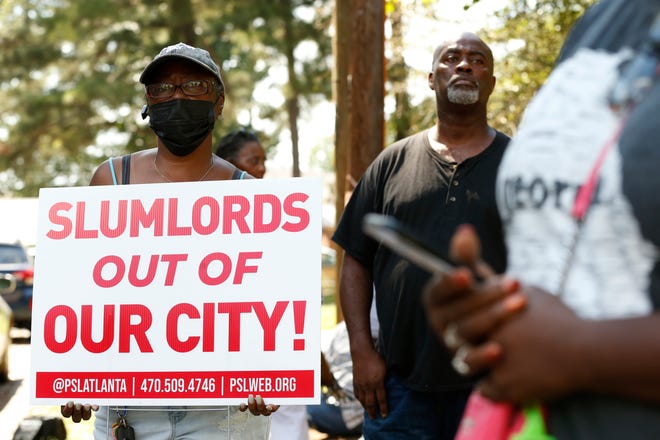 About two dozen activists and residents of Athens gathered in Lexington Heights on Wednesday to express their shock and outrage at the impending mass displacement.

The move comes after Florida-based investment firm Prosperity Capital Partners bought more than 500 apartments and condos in Athens. At the end of June, the property management company Strategic Management Partners notified dozens of residents that the rent would increase by several hundred dollars and that their leases would not be renewed.

Residents now face a dire situation: either pay the new rent or leave.

Juana Hulin has lived in Highland Park for five years. On August 1, she learned that her rent would more than double from September 1.

Hulin is a single working mother with three daughters. The prospect of moving weighs on his family.

“Clark County School District had just started school. I got this letter two weeks into school. And my kids are nervous now. And they’re very stressed out about whether they’re going to have to move. in the middle of a given school year,” she said.

Other tenants spoke of their own difficulties. A tenant, who declined to be named, has a disability and recent surgery.

“And I caught COVID coming and going trying to find a place to stay,” she said.

“Athens and Clarke County already have a homelessness crisis. And if me and my three daughters don’t find the $1,700, we’ll be homeless. I don’t have any family I can live with,” Hulin said. “I couldn’t sleep. And I was very stressed. It was a burden on my heart to bear every day.”

Who is Prosperity Capital?

Prosperity Capital Partners is led by Randy Lawrence, a real estate investor with a church background. On his website “The Real Estate Preacher,” Lawrence said his real estate portfolio is currently valued at $100 million.

Neither Prosperity Capital Partners nor Strategic Management Partners could immediately be reached for comment. But activists say his Christian background stands in stark contrast to the upcoming move.

“It just lacks respect for human life and human dignity,” said Broderick Flanigan, a community organizer with the Economic Justice Coalition. “For them to be former pastors or former ministers and have a church in the past in Florida, still treat people like that.”

“These people are not from Athens, not from this community, not even from the state of Georgia. And they are potentially pushing people out of their homes,” Flanigan said.

“The unfortunate part of this is that nothing this company does is illegal or against the law,” Flanigan said.

In Georgia, there is no law preventing landlords from dramatically increasing rent or refusing to honor Section 8 bonds. Activists and local politicians have discussed introducing measures to protect class tenants factory Girl. But laws take time, and a backlash from the state legislature is likely.

Public resources are hard to come by.

“We have different services like Advantage with the rapid relocation program, but they’re at full capacity, most of them. And you have to be on Advantage’s workload to be in their programs,” he said. -he declares. “You know, homeless shelters, most of them are at capacity.”

For now, organizers are focusing on meeting the immediate needs of tenants through relocation assistance, legal support and mutual assistance. They are also looking for affordable housing.

“We want to collect names of people who are willing to rent to low-income people,” Flanigan said. “We urge the community to come together to determine where people can go.”