After its first presentation on the Alternative Stage of the National Opera, the great musical and theatrical work The air of Greece by award-winning Greek-American composer Georges tsontakis travels to Thessaloniki for a unique performance on the stage of “Emilios Riadis” Thessaloniki concert hall the Wednesday December 29, 2021 at 9:00 p.m.. The work, a multifaceted poetic portrait of 19th-century poetry star and hero of the Greek national uprising, Lord Byron, is presented against the backdrop of the celebration of the 200th anniversary of the start of the Greek Revolution.

Known for the rhetorical and communicative power of his music, George Tsontakis, whom Gramophone magazine recently called “the giant of the American music scene”, attempts to stage Lord Byron’s last days in Greece. He places the “scene” of his work in Byron’s funeral bed and attempts to render the subjectivity of the dying poet through an objective musical composition of authentic historical evidence and excerpts from his poetic work.

The dual role of Byron (performed by an actor and a tenor) is accompanied by a six-member vocal ensemble that combines the functions of madrigal and tragic dance, contrasting the memory of the poet’s wandering and aristocratic youth in the conditions of chaotic warfare he encountered in Greece. the transcendent dimension of his ultimate and highly romantic self-sacrifice on the altar of the ideal.

The production is implemented with the support of a donation from the Stavros Niarchos Foundation (ISN) [www.SNF.org] for the creation of the National Opera’s anniversary program for 200 years since the Greek Revolution of 1821.

The musical-theatrical work L’Air de la Grecie, commissioned by the Alternative Scene of ELS, aspires nothing less to the reconstruction of the poet’s Greek adventure. Lord Byron arrived in Messolonghi in January 1824, only to die three months later at the age of 36, after a period of intense but also confused involvement with the Greek National Uprising, negotiating the Middle Age invasion and the awareness of the coming of a visionary desire for heroic action but also of an insane and unfulfilled passion for the fifteen-year-old warrior of Patras, Loukas Chalandritsanos.

oh George Tsontakis, who co-signs the textual composition of the work with the playwright Elsa Andrianou, portrayed in L’Air de Grecie the immediacy of those who have been able to feel the Lord and probably occupied his mind during these last weeks and days, beyond , of course, de la lost her battle with the deadly disease. In the play, there are two incarnations of Byron: the modern Byron, who wastes Messolonghi from a completely undefined illness and is rendered by an actor, and the poet Byron, represented by the melodic recitation of a tenor solo.

Regarding musical forces, from a vocal point of view, the composer tried to merge East with West, English poetry with the ancient Greek poetic tradition of the choir. “With this in mind and for reasons of economy, I decided to entrust a sextet of singers with a dual function: to transform itself alternately into an English madrigal ensemble and into a sort of ancient Greek tragic dance; the first, apparently, to sing the romanticism of Byron English Poetry and the second to articulate the most primary statements of the Greeks and their comments on the great lord, ”notes George Tsontakis. 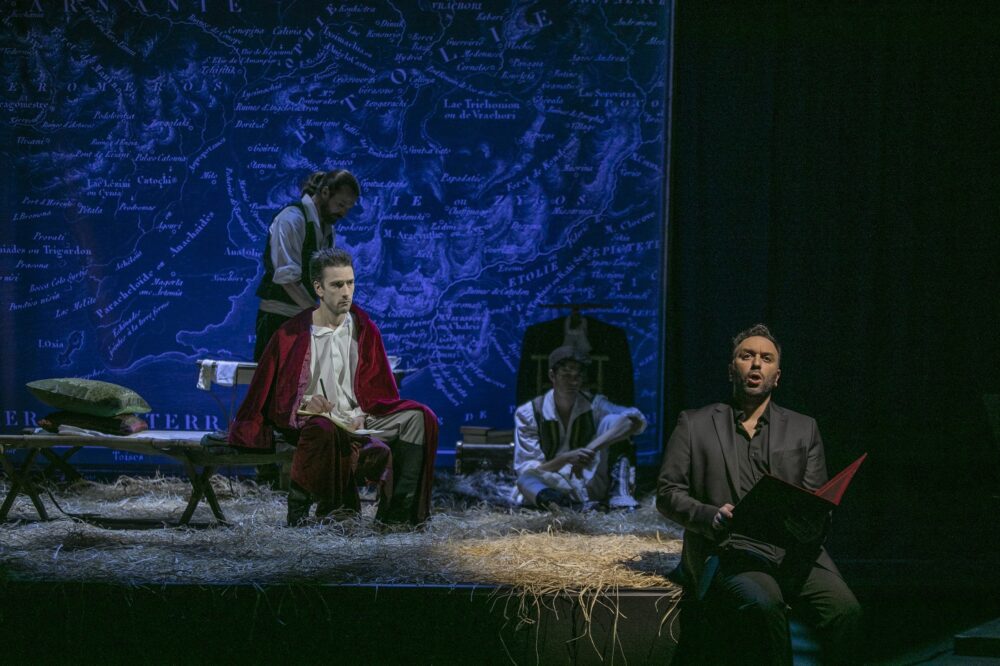 The nine musicians in the piece include percussion, harp and santouri, allowing the music to maneuver freely between east and west sound, similar to the alternation of madrigalists and dance. “The combination provides ample possibilities for both lyrical expression and the power of sensational physicality. Sometimes musicians become members of a crowd or comment strangely, creating a wider sound and theatrical range. As a result, the six madrigalists are called upon to play, talk, and quarrel as they would in an ancient Greek tragedy – and certainly George Byron’s fate meets the criteria of an ancient Greek tragedy. One might even speculate that the English poet would enjoy ‘such a personal ending, so suitably poetic and classical, “continues George Tsontakis. Kefalonia, December 1823. Lord Byron appreciates the serene landscape of the Greek island while writing in his journal. He has come to support the Greek Revolution, but his thoughts turn to his beloved half-sister Augusta and daughter Anta, whom he has not seen since leaving England seven years ago. Soon, Byron is found ill in bed in Messolonghi, in April 1824, accompanied by Tita’s Italian servant. Beside him is also the fifteen-year-old Greek disciple of Lucas, with whom Byron fell desperately in love.

The poet is indignant at the discord in the ranks of the revolutionaries, which pays the National Uprising. He dreams of unifying the Greek factions, even though their representatives seem mainly drawn to his money. Despite his frustration and a severe seizure that weakens him, Byron’s decision to help the Greek Struggle remains unwavering. Inspired by his unfulfilled love for Lucas, he tells the boy the story of Teresa, the “girl from Athens” who fell in love on her first trip to Greece years ago. The poet, exhausted by illness and emotional excitement, falls asleep and, during his restless sleep, dreams in advance of the “hereafter” and of the wandering of his body, which becomes the object controversies. He will be refused funeral at Westminster Abbey because of his “questionable manners”. He will eventually be buried in the tomb of the Byron family, near Newsted Abbey, where Eleftherios Venizelos will deliver a solemn speech on the poet in 1931.

Byron wakes up from a dream and recites in relief one of his old poems. The bleeding is damaging to his health. He goes mad, threatens to kill himself and contemplates another posthumous honorary scene based on “Ode to the British Muse” by Andreas Kalvos, as well as a Souliotes war dance. In his fever, he almost confuses young Luke with his sister Augusta. Immersed in tender thoughts, the poet dies. The Greeks express their gratitude to the great man.

George Tsontakis has received two of the most important classical music awards, the Grawemeyer International Award and the Charles Ives Living Award from the American Academy of Letters and Arts. He studied with Roger Sessions at the Juilliard School in New York and with Franco Donatoni in Rome. He was born in Astoria, New York, of Cretan descent. He is a recognized figure in Greece, with performances of his works around the world every year. His works have been recorded by the labels Hyperion, Koch, INNOVA and NAXOS.

Among them, fifteen orchestral works, over five hours of orchestral music, for which he has been nominated twice for a Grammy Award. As a guest composer, he collaborated for forty years with the Aspen Music Festival, in the United States, where he conducted the Aspen Contemporary Music Ensemble, the Philomusica Orchestra of Oxford, England, the Albany Symphony, in New York, and D Lincoln Center. He is a distinguished guest composer at the Bard College Conservatory of Music.

First presentation • Assignment of the ELS Circle alternative stage “Odes to Byron” George Tsontakis The Air of Greece Opera-drama in three scenes Wednesday December 29, 2021 / Start time: 9:00 p.m. Thessaloniki Concert Hall – Hall “Emilios Riadis” Messolonghi Dans the framework of the celebration of the 200th anniversary of the start of the Greek Revolution Commissioner of the cycle “Odes to Byron”: Alexandros Mouzas

A group of nine members participate

All productions are covid free as spectators enter the premises of the Thessaloniki Concert Hall after a mandatory demonstration of a vaccination certificate or illness certificate. Minors aged 4 to 17 need a 24 hour self-test. Within the premises of the Organization, all safety measures for driving glasses of the National Committee for the Protection of Public Health against the coronavirus are strictly observed, while the wearing of a mask is compulsory.

One of the most beautiful fortified villages in Greece