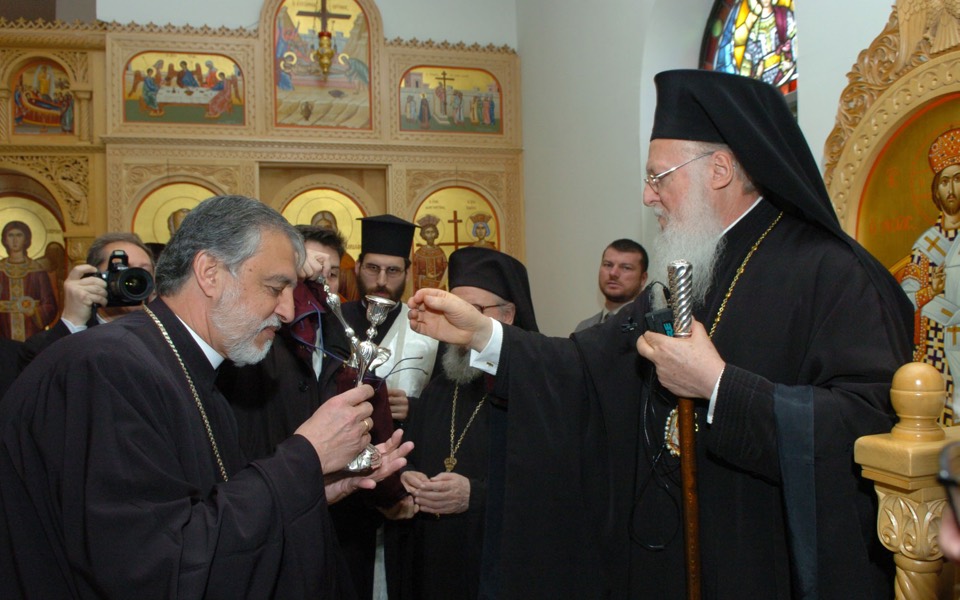 Father Alex Karloutsos (left) greets Ecumenical Patriarch Vartholomaios (right) during a visit by the spiritual leader of the Greek Orthodox world to the Church of the Dormition of the Virgin Mary in Southampton, New York, in a photo by 2006 archive. [AMNA]

The stature of the Greek-American community and its influence over American leaders has, over time, benefited Greece, Cyprus and the Ecumenical Patriarchate quite significantly. One of the people who has made an extraordinary contribution to this stature and influence is Father Alex Karloutsos, who recently announced that he is “retiring but not backing down”. For decades, he was the right arm of the world renowned Ecumenical Patriarch Vartholomaios and all the Greek Orthodox Archbishops of America, beginning with His Eminence Archbishop Iakovos. His close relationships with such prominent religious leaders provided Father Alex with a credible and powerful platform from which to work on behalf of the church community.

Father Alex’s contributions to our community come from two equally unparalleled parts. The first is his faith-driven genius that gives him insight into the hearts of others, the unique vision of opportunities, and the strategies and details of implementations that make those visions a reality. The second is best understood in his oft-heard observation of the wealthy: “I’m not impressed by their money but by what they do with it.”

During his early years he added many of our “best and brightest” to our Church. As one of them told me: “While I grew up Greek, I wasn’t for many years. Now Father Alex has made me Greek Orthodox again. Father Alex served this group he reintroduced into the Church and many others already committed to the Church through his pastoral care as a “true priest” and through hours each day helping them and their families, spiritually, professionally, educationally and in every other way. . He rewarded those most generous with the Church with an annual retreat with our Archbishop, as well as other national and international events with popes, prime ministers, presidents and princes. He is held in such high esteem that more than 1,300 people contributed at least $300 to attend an Order of St. Andrew dinner honoring Father Alex and Presbytera Xanthi. He raised a record amount.

His many accomplishments for Orthodoxy and Hellenism resulted from the combination of his extraordinary abilities and his network with committed people in the Church who possessed a unique ability. For example, when the Church’s endowment organization he helped create, “Leadership 100,” stabilized at 375 members, Father Alex partnered with real estate mogul Steve Yeonas and traveled the country to bring the membership to 775. This effectively added $40 million to the endowment. .

He did the same with our Manatos family’s nearly 90 years of involvement with American leaders, which included stopping a filibuster in the US Senate by invoking closure for only the 17th time in history. As one of many examples of our work together, he and we have enabled Orthodox Hellenes to meet with all Presidents at the White House every year for over 30 years. This has been accomplished even though our community represents less than half of 1% of Americans. The only other nationality capable of achieving such encounters is the Irish, who represent 9% of Americans.

With some of America’s best people in their professional fields thriving in “Leadership 100,” Father Alex has found several great teammates. His pairing with such people has resulted in spectacular achievements for our relatively small community. Some examples include: the new endowment of the Order of Saint Andrew which already raises more than 20 million dollars for the operation of the Ecumenical Patriarchate; overcoming complicated state and local government hurdles and raising $100 million to build the new St. Nicholas Greek Orthodox Shrine at Ground Zero in New York, which will be visited by approximately 9,000 people daily; help create International Orthodox Christian Charities (IOCC), which today distributes $21 million in humanitarian aid worldwide; deep involvement in the creation of The Hellenic Initiative (THI) which distributed to Greece, in its first 10 years, $6.6 million in direct crisis aid and $11.7 million in economic development and entrepreneurial; and the creation of the Faith Endowment for Orthodoxy and Hellenism, made up of contributors of $1 million each, which has raised more than $60 million for the Church. Over all his years, Fr. Alex has played the preeminent role in raising, all told, more than a third of a billion dollars for the ministries of our Church.

The accomplishments of the team above require a highly respected and accomplished Ecumenical Patriarch and Archbishop to empower and lead Father Alex and the lay leaders of our community. It also requires great mutual respect between Father Alex and our leaders. This was accomplished to the extent that both sides of these teams would agree that if the other side was taken out of the equation, each of those accomplishments wouldn’t be as great or wouldn’t exist at all.

Elon Musk donates $5.7 billion of his Tesla stock to charity