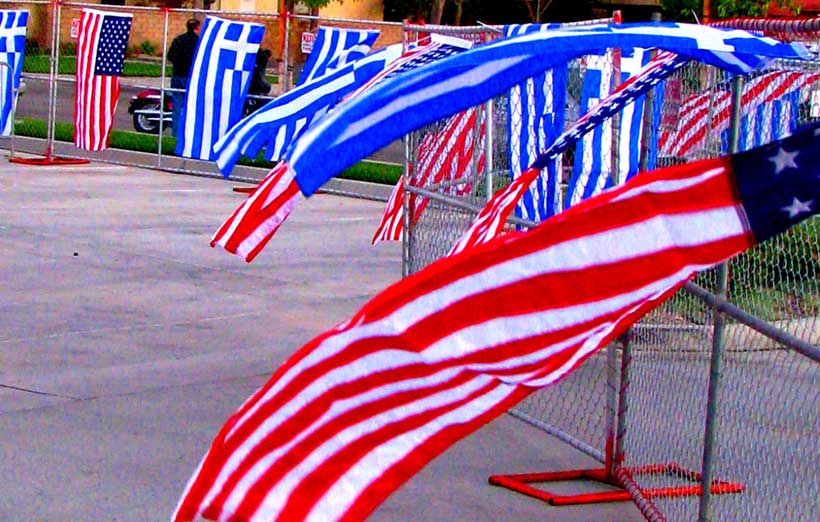 Early last year, I concluded an article titled “Greece and Russia: Back to the” Truman Doctrine? Much like with Britain in its heyday, Greece’s relations with Russia today are based on the United States keeping Russia at bay in the Eastern Mediterranean, and therefore having positive and close relations. with Greece, Russia’s natural ally in the 19th century. It would take a Greek statesman of the caliber of Kapodistrias, De Gaulle or Putin to even begin to restore the balance. Common religious and historical ties are not enough.

In line with the above and given recent developments, it now looks like Greece will do everything to be NATO’s Eastern Mediterranean anti-Russian cheerleader. The Truman Doctrine and the pro-American foreign policy of the Greek junta (1967 to 1974) are now back in force. Behind this policy lie both Greece’s atavistic fear of Turkish aggression and the automatic tendency of its ruling families after 1945 to look to America for protection, in accordance with the Truman doctrine of “keeping the Communists. apart “. Today, however, the Communists seem to have metamorphosed into Putin’s non-Communist Russia, with neo-Trumanism on the agenda.

Greece has of course the right to worry about Turkey, given the expulsion from Turkey of almost all those of Greek descent in 1964; at least three near-wars; the Turkish invasion of Cyprus in 1974; the continued occupation of more than a third of the island; the crisis of Imia; Turkey’s statement that the activation by Greece of the extension of its maritime borders to twelve nautical miles would constitute a casus belli; recent naval assault on oil drilling rights around Cyprus; and threats to Western Thrace.

But those who forget history, or studiously ignore it, may be wrong, especially those like the current Greek Minister of Defense, Nikos Panagiotopoulos, who seems to have forgotten his history and repeats the mistakes of the junta in his concern for please the uncle. Sat: On November 11, he attended the 15th Annual Baltic Defense Conference on NATO’s New Strategic Concept. Attached are a few excerpts from his remarks: “Russia, as a permanent member of the UN Security Council and one of the main nuclear powers, will remain an important actor liable to cause serious complications. […] We must use our resources effectively to give a credible, balanced, proportionate and lasting response to Russia’s aggression, so we must continue to strengthen our deterrent and defensive position by fully implementing all relevant doctrines. To top it off, he referred to Russia’s “expansive military action” and the need to improve the effectiveness of NATO’s integrated air and missile defense system, which will make a decisive contribution to the new Center. of excellence in integrated air defense and missile defense in Crete. He could have been mistaken for the Russophobic Boris Johnson or a chauvinist Polish general.

Do Mr. Panagiotopoulos and his advisers fully understand American policy, or is there a risk, as with the junta, that they will continue to be coaxed into believing that the United States would prevent Turkey from to seize a Greek island or to deploy more military might in Cyprus, simply because Greece is emerging as a major anti-Russian base for the United States? Just as the Greek junta was coaxed by Kissinger and the CIA in 1974 into believing that Turkey would not invade Cyprus, so various American officials, both underground and open, might well persuade the establishment part. Greek NATO friend that Turkey does not think what it says about Greece.

This quote from a British diplomat in 1975, following the Turkish occupation of more than two-thirds of Cyprus in 1974, still applies today, and is very revealing: “The Turks seem to have concluded very early on that the pressure American would not be supported by anything stronger [e.g. military action]; this was arguably a factor in their tactics at the second Geneva conference. It is certainly the case that Dr Kissinger was concerned with maintaining Turkish goodwill as a bulwark between the Soviet Union and the Arab States as well as the continued use of American bases in Turkey. ‘[1]

It has always been true that the United States did not allow full-scale war between NATO “allies” Greece and Turkey for fear of weakening NATO. So when the United States allowed Turkey to invade and occupy over a third of Cyprus, it was on the strict understanding that Greece would not be allowed to defend Cyprus, which came to be. turned out to be the case. If Turkey took a small Greek island, the United States would not allow Greece to attack Turkish forces to retake it.

Even the Greek Foreign Council (which is supposed to advise the Foreign Office) produces naive and selectively documented documents to give the impression that Greece can trust the United States to defend it, and that the West is the savior of Greece. For example, an allegedly academic article states: “When you assess Greece’s alignment with the West during the Cold War, you can see that the relationship is deeply rooted. Modern Greece owes its creation, in large measure, to Western Europeans who aided the Greek Revolution in 1821. ‘[2]

The authors of the article seem blissfully oblivious to the fact that Greece would not have achieved independence without Russia. Britain was forced into the equation to keep its finger in the cake, after Russia exercised its rights under the Anglo-Russian protocol of April 4, 1826, which stipulated that Britain would serve as mediator to make Greece an autonomous vassal of the Ottoman Empire, but that if this proved impossible, the two powers could intervene jointly or separately. Russia intervened and Britain was forced to take an “if you can’t beat them, join them” approach.

The newspaper also deals extensively with Cyprus, failing to even mention the British role in dividing the two communities, aiding Turkey in its propaganda and bringing Turkey in surreptitiously and illegally via a conference, which was supposed to fail, like her. did so, in 1955. Likewise, the newspaper attempts to exonerate the United States: “Thus, the invasion of Cyprus was approached by junior State Department officials who could not risk taking action. important decisions to defuse the crisis. Indeed, it can be argued with merit that the Watergate scandal, as well as the Arab-Israeli War (1973) and the later stages of the Vietnam War (1955-1975) diverted Washington’s attention from Cyprus. ‘

If the authors had not been so selective in their bibliography, they surely would have been aware that Henry Kissinger was very much in the game and expressly delayed events to give Turkey the space it needed to occupy more than two thirds of the island.[3]

Why is the Greek government so naive? Is it just because she seriously believes America will protect her from Turkish – carefully planned excesses? Does he believe that Russia is just going to sit on its hips while America uses Greece as a military tool for its anti-Russian policies? Whatever happens – in a currently particularly volatile Eastern Mediterranean – Russia will certainly not lift a finger if Turkey seizes a Greek island, sinks a Greek ship or shoots down a fighter plane. As far as Cyprus is concerned, Russia’s policy is simply to ensure that Cyprus does not become a member of NATO.

Greece ignores history at its peril.

From our partner RIAC

[2] Gilbert, Professor Mark and Marcantonatos, Leonidas, “The Importance of the Alignment of Greece with the West during the Cold War”, Johns Hopkins – School of Advanced International Studies, Greek Foreign Affairs Council, 2015.

[3] See Mallinson, William, Kissinger and the Invasion of Cyprus: Diplomacy in the Eastern Mediterranean, Cambridge Scholars Publishing, Newcastle upon Tyne, 2016 and 2017.

Greece ranked 9th in the world in handling the coronavirus crisis