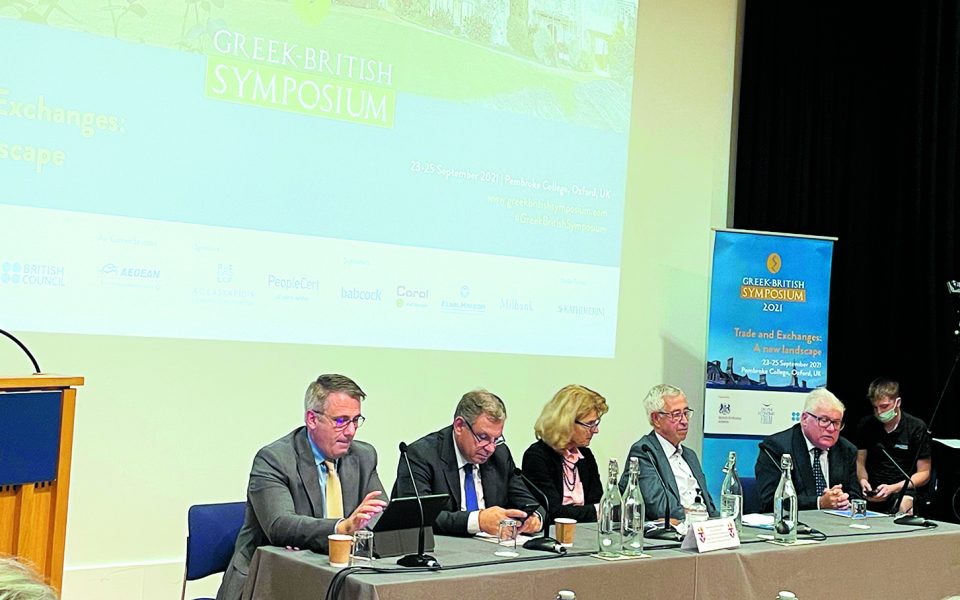 Greece and Great Britain in a new landscape

In today’s fluctuating international environment, will Greece and Great Britain be able to rely on the foundations of a long-standing relationship, on close ties dating back to the beginning of the 19th century, when merchants, Greek bankers and shipowners have settled in London, Manchester and Liverpool? These Greeks, the first to gain the right as Ottoman subjects to settle in Britain, established successful businesses, exploiting the financial opportunities presented by London and the markets of the British Empire. What has contributed to this successful coexistence? Can it be repeated today by two very different countries in very different circumstances – one a member of the European Union, the other having chosen a path outside it? What are the specific opportunities and challenges that each one faces today?

These are some of the questions that were discussed in depth by leading historians, economists, researchers, academics and others at the Greco-British Symposium, which was held at Pembroke College, Oxford from September 23-25. With the theme “Trade and exchange: a new landscape”, it was the fifth of the annual events which are held alternately in Great Britain and Greece.

The United Kingdom has played a key role in the history of Greece. The bicentenary of the start of the War of Independence provides a good opportunity to examine the past and seek opportunities for the future. A great power in the days when the Greeks fought for their freedom, Great Britain, with the most powerful navy in the world, played a decisive role in the victory of the Greeks and the establishment of the Greek state. The Greeks in Great Britain contributed greatly to the struggle and participated in the preparation of a loan for the Greeks, an evolution which, apart from the financial aspect, amounted to the de facto recognition of a State which did not yet exist. The ideas of liberal British intellectuals inspired the revolutionary Greeks. And the Greeks’ struggle for freedom inspired their British supporters, who also played a decisive role in its success.

Today, relations between the two nations remain very close on many levels, due to their long shared history, due to the thousands of Greeks who studied in Britain and those who lived there for many years. or settled there during the Greek crisis. In addition, many Britons live in Greece.

Moving on to the present, the Symposium focused on how difficulties and disruptions in international relations and the global economy could provide opportunities for closer ties in trade, finance and the exchange of services. Indeed, the current problems make the search for potential gains in Greek-British relations even more necessary.

As has been noted, the climate crisis and the need for national economies to adapt to renewable energy sources are disrupting economies and increasing production and transportation costs. But there are also opportunities to develop ideas and technologies to deal with it. All countries are obliged to adapt as quickly as possible to this challenge and to the ever greater domination of the digital economy.

As one speaker noted, Greece can exploit the opportunity offered by the technical revolution without carrying the burden of uncompetitive industries. However, the success of the effort depends on an ever-increasing number of people with access to very fast internet services – an area in which Greece lags, both in terms of speed and price.

It was pointed out that talented immigrants also play a vital role. As one commenter noted, not only do they bring new skills, but they also push residents out of their comfort zone, forcing them to further develop their own abilities. This can be seen not only in London but also in Stockholm, Silicon Valley and Germany, he added.

Symposium panels examined issues and opportunities in the international trading system, where services are becoming an increasingly important part of trade, China is playing a larger role, and the pandemic has shown difficulties in supply chains. global. Increasingly complex production and distribution networks, the greater mass of goods transported and the need for security all affect trade and transport. This means that new opportunities continually present themselves, as do problems that demand solutions.

In this context, noted many speakers, Greece and Great Britain are expected to further strengthen their already excellent relations, especially in the fields of culture, education and technology.

Aside from the effects of Brexit, both countries face a world in which trade is no longer about goods but about services, ideas and highly skilled people. The two countries have dynamic tourism and professional services and research and cultural sectors that could cooperate more.

The Greco-British Symposium is supported by the British Embassy in Athens, the Delphi Economic Forum and the British Council. Kathimerini has been her media partner from the start. Meetings are held under Chatham House rule, which means that what is discussed is not assigned to specific speakers.

One of the panels, on ‘Greece’s trade relationship with Britain: more and better’, looked at how supply chain issues were affecting the UK market that day, with gasoline shortages. and fears for the supply of goods at Christmas. This underlined the problems associated with Brexit – from the shortage of manpower in crucial sectors of the economy to the general framework of trade with the European Union.

Every discussion in Britain takes place in the shadow of Brexit. One of the responders revealed that he spent 45 minutes looking for diesel for his car in order to get to Oxford. “Gradually, we are going to have to put our commercial and economic interests before politics,” he said, noting that the referendum was held in 2016. “We are now in 2021 and I cannot find diesel for my car.

“Brexit was not about the economy, it was about ‘sovereignty’,” said a British panelist. “There is no economic plan with that. It will take a long time to train. ”

The framework remains unclear in crucial areas. Among them, the legal framework of contracts, the new rules that will apply to commerce, the status of foreign students and academics born abroad. The Greeks on the panel noted, however, that the capital for large investments was in London and that UK contract law remained the law of choice.

“If the investment is good and there is a good return on the investment, people will find ways to bypass the institutional framework,” noted one speaker.

Besides agricultural products, Greece exports technologies and pharmaceuticals to Great Britain. There is great scope for improving trade in goods, cooperation in research and technology, investments in Greece in infrastructure, healthcare, real estate, logistics, tourism, etc. However, as one speaker said, Brexit has tarnished Britain’s image and there are opportunities for students, faculty and businesses opening up in EU countries and states. -United.

One of the British speakers mentioned the “magnetism” of a country. “How are we going to present ourselves and project ourselves to the rest of the world, to encourage people to come visit us and do business with us? He asked. “It is a very important challenge and, in my opinion, a challenge that we can meet.”

He was referring to Great Britain but the challenge is common to both countries.