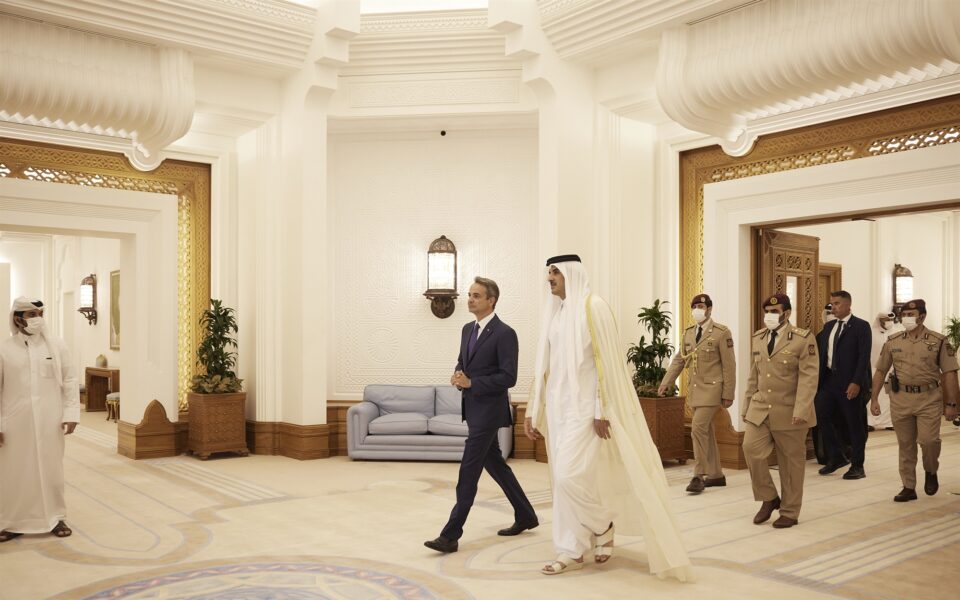 Greek Prime Minister Kyriakos Mitsotakis (left) is received at the Amiri Diwan Palace on Monday by the Emir of Qatar, Sheikh Tamim bin Hamad Al Thani, during an official visit to the Gulf state. [AMNA]

Prime Minister Kyriakos Mitsotakis’ visit to Qatar echoes Greece’s multidimensional appetite for closer ties with the Arab world. The two countries have traditionally maintained friendly relations and the blockade of Qatar in 2017 did not substantially alter the common desire for synergies. Admittedly, the January 2021 al Ula declaration that resolved the Persian Gulf “break” by recognizing the importance of unity among the countries of the Gulf Cooperation Council left behind the crisis of 2017, opened the way to strategic stability and has been welcomed by Greece, the United Nations and the international community.

In this context, closer bilateral collaboration is not only desirable but feasible. Last year, a Qatari rescue team was dispatched to Greece to help fight forest fires. Additionally, in May, the Greek National Tourism Organization and Qatar Airways launched a joint campaign to promote Greece as a tourist destination in the Gulf. In addition, maritime transport is at the epicenter of attention. Greek shipowners can play a catalytic role in transporting Qatari LNG to other markets. Greece itself is currently increasing its imports and thus accelerating the effort to diversify energy sources.

Along with tourism, shipping and energy, trade and investment are also on the agenda. Qatari statistics show that the volume of bilateral trade reached around 250 million euros in 2021 compared to 185 million euros in 2019, before the outbreak of the pandemic. Although room for improvement is evident, talks for significant investment from Qatari businessmen have yet to materialize but are progressing. Infrastructure works and real estate offer some opportunities.

In strategic parlance, Greece’s closer ties with Qatar can help the former better approach and understand Turkey’s key partner in a turbulent neighborhood. Such a development is useful taking into account, among other things, the fact that Qatar Energy – together with Exxon Mobil – has signed an agreement with Cyprus on gas exploration. More importantly, the United States has designated Qatar “as a major non-NATO ally” since March.

Subsequently, Athens and Doha took a few steps together in the field of defence. Already existing memorandums of understanding, for example between the Hellenic aerospace industry, the Hellenic automotive industry and Qatar, fuel the desire for collaboration. It is no coincidence that a few months ago the Greek Navy Commander was invited by his Qatari counterpart to attend the Doha International Maritime Defense Exhibition and Conference.

Prime Minister Mitsotakis is expected to visit Qatar again in November for the 2022 World Cup. The more the two sides talk to each other, the deeper the bilateral relationship that will be forged.

Dr. George N. Tzogopoulos is a Senior Fellow at the Hellenic Foundation for European and Foreign Policy (ELIAMEP) and the Begin-Sadat Center for Strategic Studies in Israel. During the last term, he was a lecturer at the Luiss University of Rome.

How Israel and Turkey benefit from restoring relations