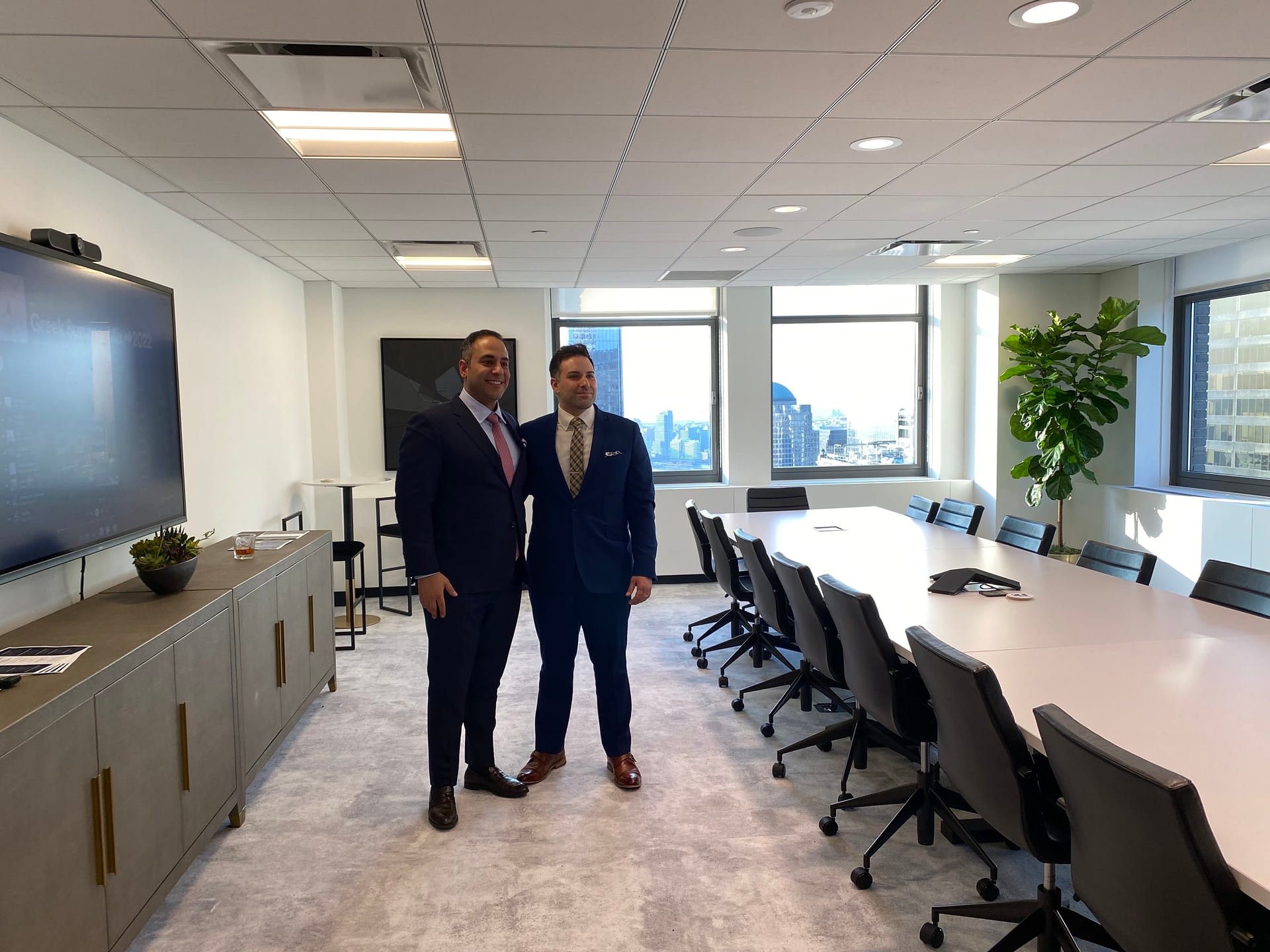 NEW YORK – KI Legal celebrated the opening of its new offices across the 49th floor of 40 Wall Street in Manhattan on March 30 with approximately 250 guests in attendance to show their support for the company’s success and in particular the co -founders Andreas Koutsoudakis and Michel Iakovou.

Over the past three years, KI Legal has grown from just two to more than 30 people now working for the firm, an impressive achievement given that most of this growth has occurred during the pandemic. The business law firm has a strong focus on real estate and hospitality in three practice areas; general counsel, litigation and transactions. Prior to the arrival of guests, Fr. John Lardas, presiding priest of Archangel Michael Greek Orthodox Church in Port Washington, blessed the space for the company. The event began with a tour of the offices for guests, followed by a reception downstairs in The Vaults with food prepared by Marathi NYC, owned by Koutsoudakis. Music was provided by DJ Evans.

Koutsoudakis and Iakovou spoke to the media about the company and their respective backgrounds. Iakovou noted that the company has worked hard and is bringing something new to the Greek-American community, and taking it to a new level, not only in New York, but in Miami, and soon in Europe as well.

Koutsoudakis added that the hard work has come at a difficult time over the past two years, pointing to the fact that their parents, their families, the entire Greek community, many of whom arrived in the United States 40 years with little or nothing, have now built great things, and while things were simpler then, and they could get by with an accountant and a lawyer, now it is necessary to protect what they built.

Iakovou pointed out that KI Legal was established in 2018, and as co-founding partners, he and Koutsoudakis “had a vision to bring global representation to business owners that was typically reserved for large corporations and law firms.” ‘much bigger lawyers…we thought that was lacking in the market and that was the whole genesis of what we’re trying to do here.We strive to represent business owners and managers on transactional matters and litigation, so they don’t really need to have a lawyer for this and a lawyer for that, it’s a team here and we all know our clients at all levels.

Koutsoudakis said others might put down the owner of the construction company in Astoria, who has been there for 40 years, but this person is their perfect client, someone they would never put down, “he’s someone ‘one we love and welcome because that’s where our roots come from, the things our parents came with nothing and built for 40 years, now they’ve built something worth protecting , if there is anything to pass on to their children. We look at this next generation of Greek-Americans who have grown up with more than their parents and they know they need more and so instead of limiting their options to businesses of a thousand people, why can’t it be more of a knitted little group that has a very boutique feel and also does everything they need to.”

Asked about their family background, Iakovou said that his family “had immigrated from the Dodecanese, Kos and Kalymnos, my father Christos Iakovou is a well-known doctor in the Astoria community and from a young age this work ethic hard work was instilled in me. , working long hours but for some reason providing service because you care about your patients, your customers…I seek to instill these values ​​in my family and children as well.

Koutsoudakis said he “grew up in the restaurant business, both my parents are from Chania, Crete, my father, may God rest his soul, died two years ago, he came here without nothing at 14 and at 10 at 24 he opened a restaurant in TriBeCa and everyone thought he was crazy but he did it… that’s how much confidence they had in what they were doing and how much support they had at home, and it was fearless. And now you’re giving people everything and they’re still struggling to do what people with nothing were doing, and that’s too bad, because that’s what he came here for, like many other Greeks, the American dream, and it requires protection, it requires a bit of leveling, and that’s what KI is trying to do Those people who have that drive…who will do anything for their family…and put themselves at the bottom of the last list, those are the people we want to represent. winners, against all odds, these people surrounded by the right professionals will always win. It is a question of values.

Greece will see the launch of the first drones in 2024