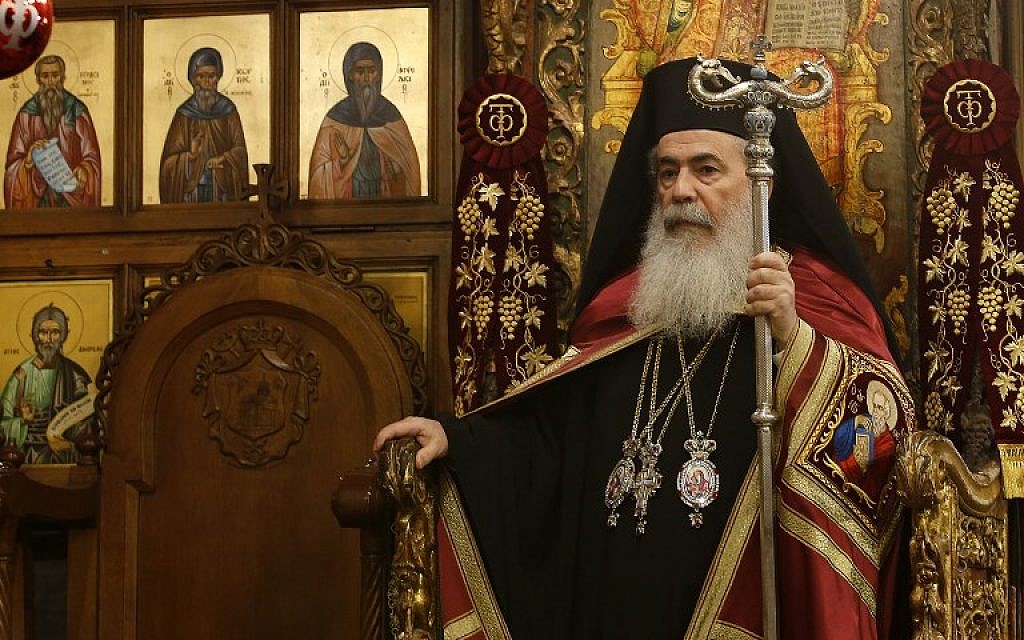 Meeting US President Joe Biden at the Church of the Nativity in Bethlehem on Friday, a senior Christian leader spoke out against what he called “unprecedented attacks by radical Israeli groups” aimed at pushing back Christians from the town.

In a statement, the Greek Orthodox Patriarch of Jerusalem, Patriarch Theophilos III, said he told the US leader that these radicals were acting “without responsibility” and that their actions included attacks on churches and attempts to seize property.

He highlighted “the challenges facing Christians and the extent of things”, including attacks on churches, insults against clergy, attempts to block worshipers from places of worship and attempts to seize real estate Christians.

Christian leaders are increasingly complaining that their communities are under threat of being driven out of the region by radical Israeli extremist groups.

In June, the Supreme Court upheld a lower court’s decision not to block the transfer of rights to three buildings in the Old City to Ateret Cohanim, exhausting any remedy for the Greek Orthodox Church after a long legal battle.

Ateret Cohanim is a religious Zionist organization that works to populate the Old City and other neighborhoods of East Jerusalem with Jewish residents by purchasing properties from non-Jewish owners.

US President Joe Biden arrives at the Church of the Nativity in the biblical city of Bethlehem in the West Bank on July 15, 2022. (MANDEL NGAN / AFP)

The decision was a final blow to efforts by the Greek Orthodox Patriarchate to fight the 2004 sale of the leases of two hotels near Jaffa Gate and a third property in the Christian Quarter.

Last December, Fr. Francesco Patton, Custos of the Holy Land of the Catholic Church and custodian of Christian holy sites in the Holy Land, wrote in an opinion piece published by the UK’s Daily Telegraph that “our presence is precarious and our future is in jeopardy”.

Patriarchs and church leaders in Jerusalem issued a joint statement also warning of the danger posed by radical groups which they say aim to “diminish the Christian presence”.

Patton wrote that in recent years the lives of many Christians have been made “unbearable by radical grassroots groups with extremist ideologies.”

“It seems their goal is to liberate the Old City of Jerusalem from its Christian presence, even the Christian Quarter,” he said.

Holy sites, including churches, have been desecrated and vandalized, while crimes have been committed against priests, monks and worshippers, Patton charged.

“These radical groups represent neither the government nor the people of Israel. But as with any extremist faction, a radical minority can all too easily burden the lives of many, especially if their activities go unchecked and their crimes go unpunished.

Prof. Francesco Patton, Custos of the Holy Land, Custodian of Christian Holy Places in the Holy Land on behalf of the Catholic Church (Courtesy)

Patton wrote that while Christians once made up 20% of Jerusalem’s population, today they make up less than 2%. He appealed to the world for support “so that we can continue to preserve the rich diversity of this Holy Land”.

In their article, Welby and Naoum wrote that there is a “concerted attempt to bully and drive out” Christians.

The archbishops said the increase in the number of Israeli settler communities, coupled with restrictions on movement imposed by the security fence that Israel built to thwart terror attacks from the West Bank, had “deepens the isolation of Christian villages “.

As a result, the two men wrote, there is “a steady stream of Palestinian Christians leaving the Holy Land to seek lives and livelihoods elsewhere.”

Extremist Jewish activists have for years carried out acts of vandalism against Christian sites in Jerusalem and other parts of Israel, including hate graffiti and arson. Extremists also target Palestinians.

Israel seized East Jerusalem from Jordan in the 1967 Six-Day War and later extended its sovereignty over it, in a move never before recognized by the international community. He now considers the entirety of Jerusalem as his capital, citing the Jewish historical and biblical connection there.

Agencies contributed to this report.

Israeli cuisine is taking the world by storm. Here is your chance to participate…

The Times of Israel community is thrilled to present its new virtual kitchen series, B’teavonwhere world-renowned chefs show you how to prepare classic and modern Israeli dishes.

You are a dedicated reader

We’re really glad you read X Articles from The Times of Israel over the past month.

That’s why we started The Times of Israel ten years ago – to provide discerning readers like you with must-read coverage of Israel and the Jewish world.

So now we have a request. Unlike other media, we don’t have a paywall in place. But since the journalism we do is expensive, we invite readers to whom The Times of Israel has become important to support our work by joining The Times of Israel community.

For just $6 a month, you can help support our quality journalism while benefiting from The Times of Israel WITHOUT ADVERTISINGas well as access Exclusive content only available to members of the Times of Israel community.

Thanks,
David Horovitz, founding editor of The Times of Israel

Convicted on November 17, a terrorist leader obtains a 3-day release from prison; The mayor of Athens outraged

Ukraine says Russia is preparing for next stage of offensive