The Greek people, as polls collected by the Alpha TV channel show, have spoken on several issues, including the government’s decision to send arms to Ukraine.

More precisely, 62% see that things will become difficult for Greece for sending arms to Ukraine, while 67% see the deterioration of Greek-Russian relations, which was clearly indicated by the official spokesperson Russian Foreign Minister Maria Zakharova.

For the war in Ukraine, 53% believe that it will have a negative effect on Greece’s position vis-à-vis Turkey because the crisis favors the latter.

The survey was conducted between March 2 and March 8 and involved 1,026 people.

On the question of whether Greek-Russian relations will deteriorate: 67% answered yes, 22% maybe, 10% no, 1% did not answer.

Regarding sending military equipment to Ukraine from Greece: 62% say it will make Greece’s position difficult, 27% said it will help Greece’s position, 9% say neither, and 3% did not respond.

When asked what the most important issues in life are: 17% said COVID-19, 48% said economy, 1% said neither is important, and 33% said both are equally important.

How should the government manage the economy: 44% reduction in VAT on basic necessities, 32% increase in the minimum wage, restoration of social energy tariffs by 5%, 4% emergency allowance, 9% cap on fuel and bread and 6% on the others.

We recall that another poll carried out by Interview on behalf of Politic, one out of two Greeks (51%) is in favor of the Ukrainian side, 34% do not support any camp, while 15% support Russia.

The sympathy of the Greeks for the Ukrainian people is also evident, as the sanctions imposed on Russia are approved by the majority (63%) of the respondents.

The overwhelming majority of Greeks (83%) are in favor of granting a 12-month residence and work permit to Ukrainian refugees. 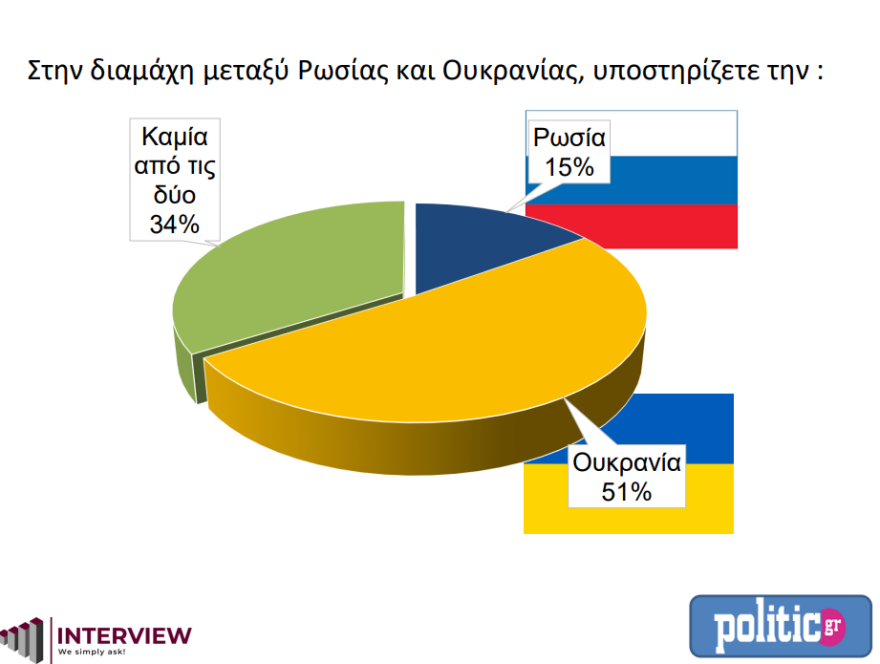