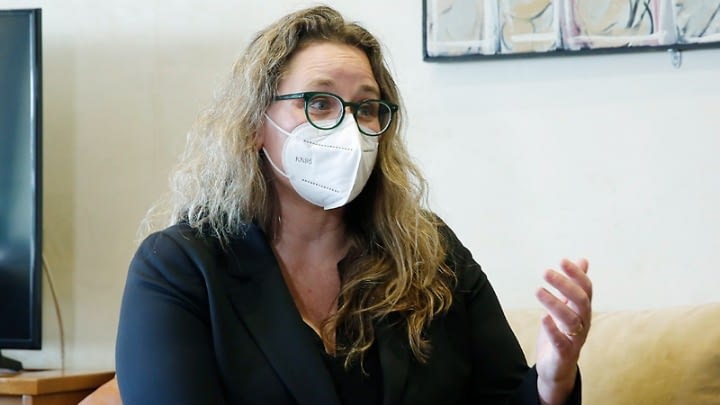 ATHENS – US Deputy Assistant Secretary of State Erika Olson, who oversees policy for Southern Europe and the Caucasus, gave an interview to the Athens-Macedonian News Agency (ANA-MPA) during her visit in Athens and Thessaloniki earlier this week.
Stressing that bilateral relations between Greece and the United States are currently “better than they have ever been,” Olson said she sees “opportunities for us to continue to grow and expand on this good work. “.

On the importance of the port city of Alexandroupolis in northern Greece, the US official said it “plays a key role in building regional stability, but also in strengthening energy security and European climate”, adding that “the frequent rotations of American and NATO personnel underline the acceleration of our military and security relationship which is anchored in our Mutual Defense Cooperation Agreement (MDCA), which we have updated last fall with the visit of [Greek] Minister of Foreign Affairs [Nikos] Dendias.

With the development of the floating storage and regasification unit (FSRU) in the Alexandroupolis region, in particular after the entry of Hellenic Gas Transmission System Operator (DESFA) in the share capital of Gastrade with a 20% share, Olson stressed that he “would be [yet] another mechanism to bring diversified natural gas and LNG into the country, which is important not only for Greece but also for the entire Balkan region as another source of energy flow.

“When we talk about energy, as you know, the United States accounts for more than 50% of Greece’s LNG imports,” she pointed out, adding that “it’s a very important part of our relationship, especially as it shows Greece’s strategy to diversify sources, and as we look forward to increased renewable energy, innovation in the energy sector.Olson noted that during his stay in Athens and Thessaloniki, she had the opportunity to meet government officials working in the field of energy, as well as in leading companies. “I think there is a great opportunity. Greece has the wind, it has the sun, it has everything it needs to amplify renewable resources and push them into the European grid,” she stressed.

Regarding the tender for the sale of the majority shares of Alexandroupolis Port Authority SA, she said that “we are also very pleased to see several American companies very interested in the privatization of the port of Alexandroupolis and we hope that [it] will lead to even more US investment in the region.

Commenting on opportunities for bilateral cooperation in various other energy projects, in light of the process of phasing out dependence on lignite for power generation in the Greek region of Western Macedonia, and plans for the so-called green transition , she said that “these projects are very interesting, and provide an opportunity not only for American companies to invest, but also for American and Greek companies to work together, innovate and “green” the energy in this region. It also creates more synergies for the United States and Greece to work together not only bilaterally, but also in a regional context, she explained.

“My impression of Thessaloniki is that it’s a city full of energy and full of potential”, she exclaimed, and that “we are so honored to see so many American companies getting involved in the economy of Thessaloniki, and pushing development especially in high-tech, green energy and education.

She also referred to investments in Thessaloniki by companies such as Cisco, Deloitte, Pfizer, which she said have also invested throughout Greece, as “we have seen constant new investments from American companies, and we have also AWS, Microsoft, Applied Materials, and then in the energy sector there are even more.

“We are looking for opportunities to do more together, and I think in Thessaloniki and in northern Greece there are many different places where we can deepen this relationship,” noted Olson, who also expressed his certainty that Thessaloniki can attract even more American companies. . Citing meetings she had with top business leaders and educators in Thessaloniki, Olson pointed out that “one of the things we talked about is the human capital that he is here.” Referring to the Aristotle University of Thessaloniki as the largest university in Greece and the Balkans, Olson said students there “can impact innovation and really be engines for the economy.”

Finally, Olson mentioned the US Ambassador to Greece, Geoffrey Pyatt, who she said often speaks of US-Greek bilateral relations as being “at an unprecedented level”. [high] level.” In this context, Olson noted, more opportunities “exist in the coming months (for example, Delphi Forum or Capital Link in New York) to continue to develop this relationship, not just government-to-government, but also from person to person and also within our economies.