Poseidon Med II (PMII) encompasses all the technical, regulatory, operational and financial parameters necessary to establish a viable, efficient and sustainable supply chain in the region and to unlock the investments necessary for the realization of small-scale LNG (ssLNG) infrastructure of the region.

Under increasing pressure to follow a greener ‘path’ towards a carbon-free future, with a growing number of international and European regulations and standards limiting emissions, coupled with the prospect of the maritime sector being included in the trading system. EU emission allowances (EU ETS) and the establishment of an Emission Control Area (ECA) in the Mediterranean Sea on the horizon, the shipping industry must turn climate change targets into concrete actions. From this perspective, LNG offers a decarbonisation route for the maritime transport industry. By investing now in LNG-fueled vessels, vessel owners can achieve immediate reductions in GHG emissions on a Tank-to-Wake basis, while paving the way for carbon neutral shipping with the use of liquefied biomethane. (LBM) and liquefied synthetic methane (LSM).

The growing number of LNG bunkers as well as LNG fueled vessels, exemplified by the nearly 20% growth in respective tonnage ordered last year, is testament to the growing recognition of the environmental benefits of LNG as a marine fuel. These investments, along with the expansion of onshore LNG infrastructure, ensure the critical delivery of LNG to ships on the last mile.

In 2020, the Greek Ministry of Maritime Affairs gave the “Port of Piraeus” the “green” to start, in specific places inside the port area, LNG bunkering operations, either from ship to ship. or truck to ship, whenever the necessary investments are in place.

Given the key role of the Revithoussa LNG terminal as a “logistical springboard” for the ssLNG supply chain in the wider region, investments for small-scale facilities in the terminal are underway. Following the studies undertaken within the framework of the PMII, a truck loading station, for bunkering and supplying off-grid consumers, is currently under construction and will be operational by May 2022. In addition, the basic technical design a new ssLNG jetty has been completed. The installation will accommodate vessels of 1,000 m3 at 28,000m3 and is expected to be operational by February 2023.

Regarding the ports, the respective master plans for the LNG bunkering facilities for Piraeus, Patras, Heraklion, Igoumenitsa and Limassol have been completed and the authorization process for mandatory environmental studies is being finalized. In order to maximize the opportunities created by these actions, an LNG bunker vessel, registered at the port of Piraeus and scheduled to load LNG from the nearby Revithoussa terminal, is currently under development.

In Cyprus, PMII is financing studies for the construction of a permanent berth for the mooring of LNG bunkers, in front of the FSRU mooring jetty in the Vassilikos area.

In addition, to support the efforts of the maritime transport world to achieve the ambitious objectives of the IMO and the EU in terms of the environment and to set an example, PMII has funded the realization of the design studies for the modernization of ten conventionally fueled vessels to run on LNG, five of which were detailed designs, as well as a conventional and innovative RO-PAX ferry using environmentally friendly technologies to improve propulsion and efficiency. In addition, cost-benefit analyzes were performed for all ports and the ten selected vessels.

At the same time, the construction of an innovative LNG bunkering vessel with a semi-ballastable system (SBBT) is nearing completion in Italy and will operate in the Adriatic Sea. 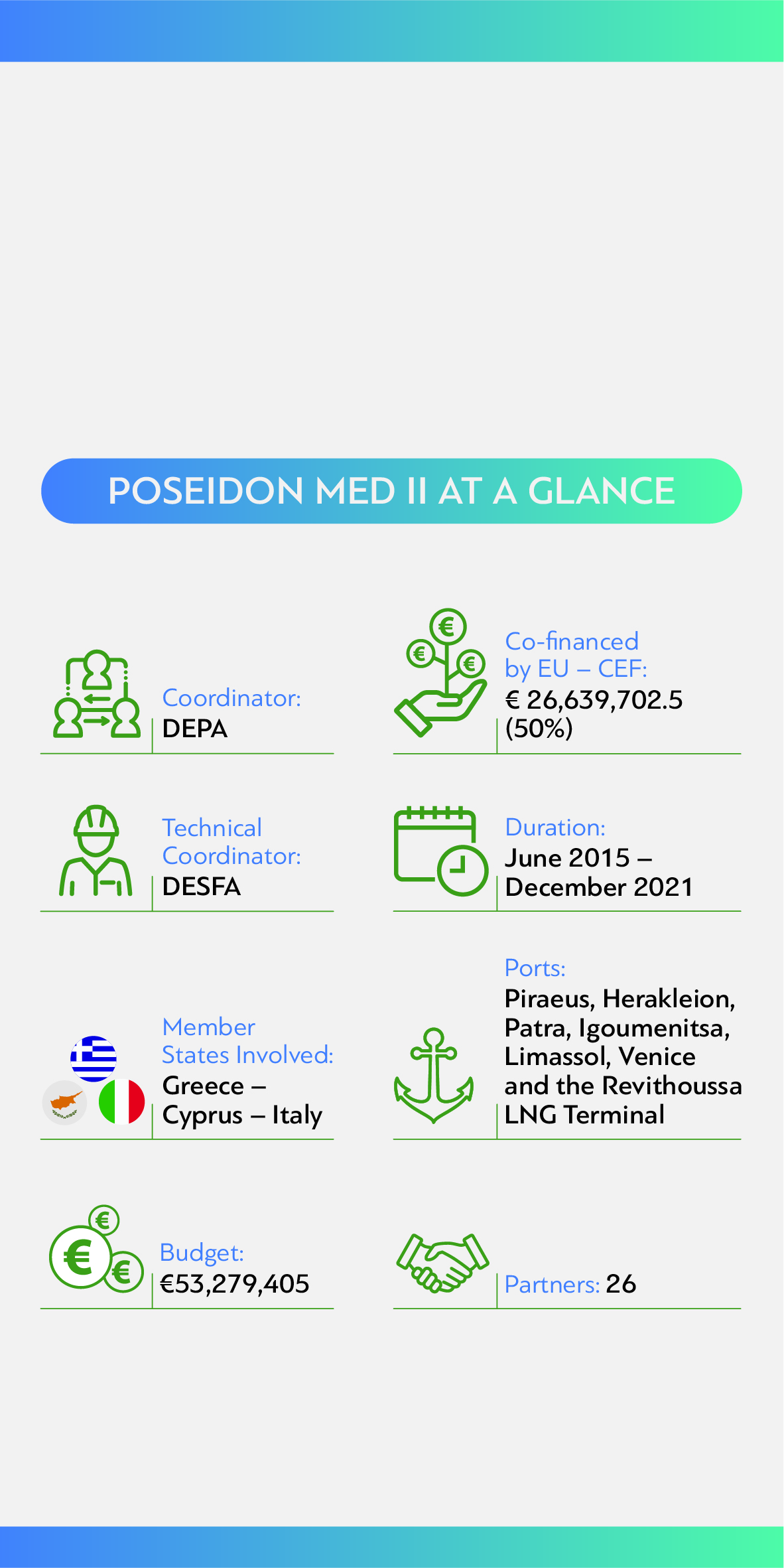 Regarding the regulatory framework, PMII contributed with proposals to the preparation of the “umbrella” legislation to ensure the safety of LNG bunkering operations in Greek ports, which resulted in legislation published in 2019 in the Official Journal (presidential decree 64/2019). In addition, PMII has produced a practical guide for port authorities on how to maintain safety during LNG bunkering operations.

In order to establish an economically viable supply chain, PMII has funded a series of studies assessing the cost of LNG bunkering logistics and synergies with other sectors, such as natural gas supply to the industrial network. and / or urban in Western Greece (Patras & Igoumenitsa) and Vassilikos (Cyprus).

In addition, thanks to targeted dissemination events and a communication action plan, stakeholders and the general public are better informed about the use of LNG as a maritime fuel and the importance of creating sustainable maritime transport. .

The sole responsibility for this publication lies with the author. The European Union is not responsible for any use that may be made of the information contained therein.

Greece ranked 9th in the world in handling the coronavirus crisis