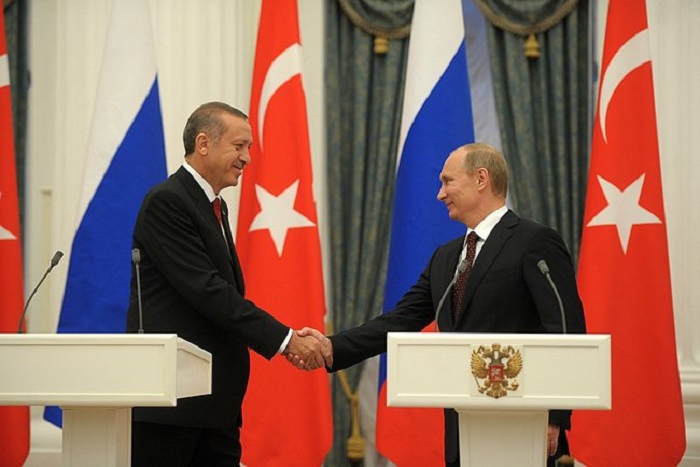 Putin and Erdogan: architects of revisionism

President Vladimir Putin is now showing the world the dark signs of Russian revisionism by violating international law and ignoring international treaties. In Putin’s logic, justifying his invasion of a neighboring country, if Ukraine was once part of the Soviet Union, why shouldn’t it be part of Russia now?

Some of the excuses used by the Russian leader were that Ukraine is ruled by a straw man and home to many “neo-Nazis” who threaten the lives of Russians living in the country. Never mind that its president, Volodymyr Zelensky, and its prime minister, Denis Schmyhal, are both Jewish.

Last year, the Russian president declared that Russians and Ukrainians were “one people”, while in the past he called the 1991 Ukrainian referendum for independence “a mistake”.

Ankara claims that the Greek islands near its coasts should belong to Turkey, or that the Turks of the 1923 population exchange living in Western Thrace are Turkish citizens; Thrace therefore also belongs to Turkey.

The close ties and exchanges between Putin and Erdogan make the two leaders appear as the architects of revisionism in sensitive geopolitical terrains such as Eastern Europe, the Balkans and the Eastern Mediterranean.

Putin’s double talk – promising the West that he will not attack Ukraine and yet invading the country two days later – shows complete and utter disrespect for Western powers and the EU.

At the same time, Russia threatens Sweden and Finland that if they dare to join NATO, they will have to suffer the consequences. The Russian hegemon seems to view Europe as a soft military power that poses no threat to its power.

Likewise, the Turkish president displays his own revisionism by evoking his vision of reviving the Ottoman Empire of yesteryear, while negotiating with Europe for Turkey’s accession to the EU.

For his part, on the military level, Erdogan is trying to keep one foot in NATO and the other in Russia. It buys the S-400 missile system from Russia and, at the same time, pledges allegiance to the Alliance.

For Putin, it’s Ukraine. For Erdogan, these are Greece and Cyprus, two countries that he and his team openly intimidate and threaten, while repeatedly violating their territorial rights.

Greek and Cypriot analysts see that Erdogan is likely to follow Putin’s Ukrainian strategy in Greece and Cyprus. Not now that the Turkish economy is at an alarming level, perhaps – but later in the future, depending on the results and repercussions of Russian aggression.

Analysts believe that the occupied part of Cyprus is the easiest target to satisfy Erdogan’s taste for an empire of his own.

A large Turkish military presence in Northern Cyprus and the creation of a pseudo-state is of course something that has been happening since the 1974 invasion.

Then there are always the repeated violations of Cyprus’ exclusive economic zone and claims that the island’s natural resources also belong to Turkish Cypriots.

As for Greece itself, it seems much less likely to become a breeding ground for Ankara’s revisionism than Cyprus.

The two neighbors are NATO allies, while at the same time Greece’s military strength and preparedness do not go unnoticed by the Turkish general staff.

Turkey’s pretexts that Greece refuses to demilitarize its islands and the alleged “oppression” of Muslim minorities in Thrace are weak excuses for a possible attack on the country.

There are opposing – albeit few – opinions to this argument, saying that Erdogan is unpredictable and could take one last step to attack Greece in the hope that the rest of the world is focusing on Ukraine right now. .

Such a move, however, would be the final blow to Turkey’s staggering economy. Adding to this the sanctions imposed by the international community for such an aggressive act, it would be the final nail in the coffin of the Turkish economy.

For Erdogan, it is difficult to keep his balance between Moscow and Brussels, between NATO and Putin. Any choice will cost him. And after the invasion of Ukraine, Erdogan’s tango between Moscow and Washington becomes even more dangerous.

Revisionism: a threat to international peace

International treaties and agreements, which reflected the positions of the powerful – and guaranteed the security of the less powerful – are being undermined, if not undone, today.

Ukraine is the blackboard on which Putin tries to rewrite history from a nationalist mythology, from a delusion of grandeur of a Russian empire of the past.

Unfortunately for the rest of the world, he chose to rewrite it in blood.

Making These 6 Motorcycle Buying Mistakes Will Make You Regret Down The Line!