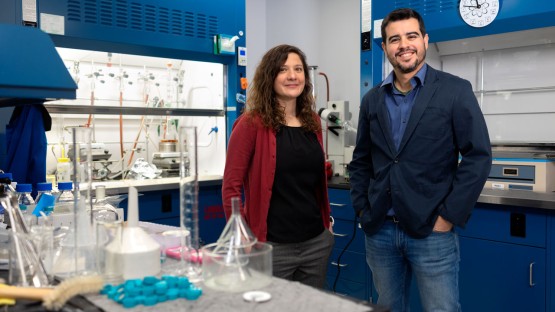 When Kristina Hugor was working on her Ph.D. at Cornell, she didn’t just do science for science’s sake.

“I care very deeply about the environment and climate change, and I wanted to find a way to focus my career and my life on solving the defining crisis of our time,” said Hugor, MS ’12, Ph. D. ’16, whose thesis research improved alkaline exchange membrane materials to make alternative energy sources more efficient.

She, like dozens of other clean energy entrepreneurs, has found at Cornell an innovative and powerful ecosystem that supports the transition to a sustainable, low-carbon economy.

It was Cornell’s clean energy ecosystem that made Hugor’s vision a reality. While she was finishing her doctorate. in 2015, a Cornell colleague – Gabriel Rodríguez-Calero, MS ’12, Ph.D. ’14 – offered to collaborate to commercialize his research. In June 2015, they founded Ecolectro to create cleaner, cheaper and more scalable green hydrogen — a crucial step in achieving a low-carbon economy, Rodríguez-Calero said. “Hydrogen is a $150 billion market. Most people don’t realize it’s used in the production of everything from fertilizer to peanut butter.

The strong foundation the startups have found in Cornell’s clean energy ecosystem has helped them attract significant outside funding.

Ecolectro recently closed a $4.5 million financing round led by Starshot Capital with backing from investors including Toyota Ventures. And it has just joined a new consortium aiming to create a North-East research center centered on hydrogen energy.

These companies and many other start-ups have leveraged support from Cornell resources such as the Kevin M. McGovern Family Center for Venture Development in the Life Sciences and the 76West Clean Energy Competition, which is administered by Cornell and funded by the New York State Energy Research and Development Authority (NYSERDA).

“McGovern provided us with the kind of collegial environment that you would associate with being part of a much larger company and being exposed to vital relationships,” Rodríguez-Calero said. “And participating in 76West gave us the opportunity to communicate the potential impact of green hydrogen to a wider audience.”

The 2030 Project: A Cornell Climate Initiative, launched this year and housed at the Cornell Atkinson Center for Sustainability, will leverage Cornell’s strengths in collaborative scholarship and entrepreneurship and aims to engage investors and collaborators to accelerate the developing large-scale solutions to climate change.

“With The 2030 Project, we aspire to translate Cornell’s cross-disciplinary research and expertise into solutions and actions for a safer, healthier, low-carbon world,” said Benjamin Z. Houlton, Dean Ronald P. Lynch of the College. of Agriculture and Life Sciences. and a co-chair of the initiative. “As we respond to pressing climate challenges, entrepreneurs and innovators working on clean technology and carbon dioxide removal are essential partners in our efforts to demonstrate and scale game-changing solutions, putting the focus on inclusive pathways for a better and brighter future.”

And in 2021, the College of Engineering hired David Putnam, its first Associate Dean for Innovation and Entrepreneurship.

“Our aspiration is to be the premier college of engineering that consistently comes to mind when people talk about who is doing entrepreneurship, including in cleantech,” said Lynden Archer, Dean of Joseph Silbert Engineering. “Our faculty is involved in a range of groundbreaking initiatives, including research into wireless charging for electric vehicles, the development of cost-effective batteries that use earth-abundant materials like aluminum and zinc, and pioneering photocatalytic processes that convert carbon dioxide emissions from power plants into low-carbon synthetic jet fuel.

Provide support to exit the lab

In 2016, two Cornell engineering professors each separately applied for funding from NEXUS-NY, a NYSERDA-funded clean energy business accelerator. NEXUS-NY recognized the similarity of their ideas and presented them.

From there, the professors – David Erickson, Director SC Thomas Sze of the Sibley School of Mechanical and Aerospace Engineering and Tobias Hanrath, Marjorie L. Hart ’50 Professor of Engineering at the Smith School of Chemical and Biomolecular Engineering – co-founded Dimensional Energy with NEXUS-NY mentor Jason Salfi ’92.

Dimensional Energy uses its innovative reactor, based on Cornell research, to harness sunlight and hydrogen produced by electrolysis to turn captured carbon dioxide into energy-dense synthetic gas. This “syngas” can be converted into products that are generally dependent on fossil fuels. The startup’s first offering is a low-carbon, high-performance jet fuel.

As Dimensional Energy gained momentum and reached technical milestones, Cornell offered the support it needed to emerge from the lab, says Salfi, CEO and co-founder. “McGovern has provided space on campus to conduct catalyst research and safely test our reactor, allowing us to accelerate our growth and ability to pilot our technology in the field – a pilot project funded by a round of table largely filled by our extended Cornell family,” he mentioned. “Having a coworking space at Rev that is nationally networked signals Ithaca and Tompkins County’s commitment to building a vibrant startup community.” The startup also received valuable support from the Academic Venture Fund via Cornell Atkinson.

This strong base has attracted strong funding opportunities. Dimensional Energy has received over $6 million in DOE Advanced Research Projects Agency-Energy (ARPA-E) grants and the Office of Solar Energy Technologies has closed a $3 million funding round dollars and entered as a finalist in the $20 million Carbon X Prize competition. The startup plans to use its latest $3.1 million funding from ARPA-E to 3D print ceramic components for its reactors that can run on low-carbon electricity sources.

Capro-X’s fermentation technology is based on research carried out in the Cornell laboratory in Angenent. WheyAway, the startup’s biotech solution, uses natural, non-GMO microbes to turn waste into clean water and eco-friendly chemicals used in consumer products.

The company projects that by processing just 10% of the acid whey waste produced in New York, it can produce 500,000 gallons of environmentally friendly chemicals per year and avoid 10,000 tons of greenhouse gas emissions. greenhouse caused by the trucking of waste to other sites. Capro-X won a $250,000 prize in the 2019 Grow-NY Agribusiness Competition, administered by Cornell’s Center for Regional Economic Advancement.

“Looking back, the opportunities and experiences that were presented to me as a student gave me a solid foundation to build a science startup from scratch,” said Guzman, CEO. “Cornell’s entrepreneurship ecosystem really makes this area ideal for developing a new business.”

The company is currently fundraising to continue building its team with the goal of bringing its green chemicals to market later this year and installing its first commercial system in 2024.

Ecolectro’s new funding will advance the commercialization of its next-generation technology, which eliminates the need for the rare metals found in today’s fuel cells and electrolysers, making green hydrogen production cheaper and reducing addiction to rare metals.

Its technology exemplifies the power of Cornell’s clean energy ecosystem. The technology was born out of collaborative research at the College of Arts and Sciences in the laboratories of Héctor D. Abruña, Emile M. Chamot Professor of Chemistry, and Geoffrey W. Coates, Professor of Chemistry at Tisch University, with whom Hugar completed it. graduate research. Both professors are scientific advisors to Ecolectro – Coates is also a scientific co-founder – and Cornell Atkinson Fellows; their labs are part of the Center for Alkaline Based Energy Systems at Cornell.

“I strongly believe in the power of networks at Cornell,” Rodríguez-Calero said. “We’ve leveraged this to find investors, development partners and employees, many of whom have participated in or are affiliated with Cornell.”

Sara Baier is a senior marketing and communications specialist for the Center for Regional Economic Advancement.

How was May Day celebrated around the world?