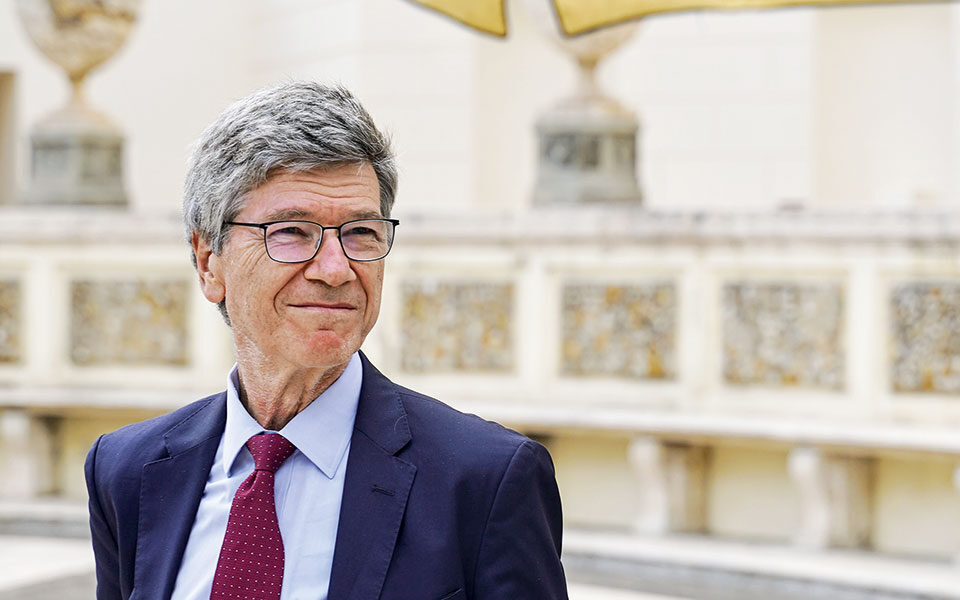 The EU must not “fall blindly” behind the United States

Can ancient Greek and Chinese wisdom help humanity overcome a series of crises that occurred almost simultaneously? Professor Jeffrey Sachs thinks so. The director of Columbia University’s Center for Sustainable Development, an internationally renowned economist and friend of Greece, spoke by email with Kathimerini before his arrival in Athens, where he helped organize a workshop to the Academy of Athens from July 6 to 8 in which scholars specializing in ancient Greek and Chinese wisdom participate.

The Ancient Wisdom for Modern Challenges Workshop is held under the auspices of the Municipality of Athens, supported by the United Nations Sustainable Development Solutions Network, the Academy of Athens, the Aikaterini Laskaridis Foundation and others.

Sachs spoke about global challenges, the origin of the coronavirus, the war in Ukraine, the dangers of environmental instability, and the social and political issues facing the United States.

What is the idea and purpose of the workshop you are helping to organize in Athens?

Plato and Aristotle coined the idea that the good life (eudaimonia) depends on both personal virtue (arete) and political virtue. Aristotle explained that politics comes in two forms, the good (monarchy, aristocracy, republic) and the bad (tyranny, oligarchy, populism). Our goal is to see how this ancient wisdom, and that of ancient China as well, can be applied to modern challenges, and to see how the concepts of eudaimonia, arete and polis can help guide the world towards a life better in the 21st century. . We are, as it should be, welcomed by the Academy of Athens, and will of course visit the Lycée during the workshop!

On May 31, you co-wrote an op-ed in the Boston Globe with Neil L. Harrison challenging the standard narrative about the origin and nature of the coronavirus. Do you think it was designed in the laboratory? Do you entertain the possibility that it was published intentionally?

Although two hypotheses – natural spread of the virus or creation of the virus in the laboratory – are possible, I think the evidence now leans towards the creation of the laboratory. It is clear that there was a mountain of hidden genetic manipulation of SARS-like viruses sponsored by the US National Institutes of Health (NIH) and even the announced intention to insert a dangerous furin cleavage site (FCS) in a SARS-like virus. When the SARS-CoV-2 virus first emerged, many high-level virologists believed that the presence of FCS made it possible or likely that the virus originated in the laboratory. Yet the NIH has worked hard to stifle this view and give the false appearance that the virus almost surely arose in nature. In short, the NIH acted dishonestly.

It is time for the European Union to champion an investigation not only of China, but also of the United States, since it is really American biotechnology that is at fault and since the NIH has sponsored research dangerous unknown to European leaders or the public. There are good reasons to believe that such dangerous research continues until today.

There is no evidence that the virus was deliberately released from the lab. If he walked out of a lab, he almost certainly did so accidentally, and possibly with an asymptomatic lab worker, who wasn’t even aware he was infected.

“Even the Eastern Mediterranean is scrambling for oil and gas reserves that should be left under the sea!” We need sun, wind, hydro, geothermal, not fossil fuels!

You also wrote an impressive op-ed in Il Sole regarding the 2030 regeneration. You make the case that we are well beyond Earth’s planetary limits, virtually all “limits to growth.” Are you still optimistic that humanity can avoid climate and ecosystem decline before a series of major disruptions derail civilization as we know it?

It is possible to avoid the catastrophe, but too late to avoid very heavy costs. Look at global warming. It is already 1.2°C above pre-industrial levels, and global warming continues today at more than 0.3°C per decade. We will most likely exceed the 1.5°C limit set in the Paris Agreement. Forest fires, droughts and other disasters hitting Greece are likely to worsen. I am writing to you today from Italy, where a very severe drought has hit much of the country.

Yet even with all this danger, Europe is reopening coal mines in the wake of the war in Ukraine, instead of negotiating an end to the war. Too many politicians are myopic. Even the Eastern Mediterranean is scrambling for oil and gas reserves that should be left under the sea! We need sun, wind, hydroelectric, geothermal energy – not fossil fuels!

The war in Ukraine appears to be leading to a protracted stalemate, sending economic, energy and food crises spreading across the world. How can it be finished?

The war in Ukraine was instigated by American neoconservatives, like US Under Secretary of State Victoria Nuland, who relentlessly pushed for NATO expansion in Ukraine and Georgia. Russia responds to pressure for US hegemony. Of course, that doesn’t excuse war, but it does explain it. Yet the European Union is falling blindly behind the United States, once again. It is time for Europe to understand that American aspirations for global hegemony are as dangerous to the world as the British Empire was in the 19th century. After America’s wars of choice in Serbia, Afghanistan, Iraq, Syria, Libya, Yemen and elsewhere over the past quarter century, NATO should be cautious and stop expanding ‘Is (violating the promises made to Gorbachev already in 1990).

The United States is heading for a more polarized midterm election than ever, while liberal values ​​appear to be retreating, symbolized by the shock of the Roe v Wade reversal. Meanwhile, the “big lie” is still powerful – perhaps as a useful pretext for a sizable minority of white Americans to actually express that they do not accept as “legitimate” the growing influence of blacks and Hispanics in America (which is why they dubbed an election where voting became easier for lower-class citizens as the “big robbery”). Can a deeply divided United States continue to offer leadership to the free world?

No, for three reasons. First, we live in a multipolar world, even if American neoconservatives do not yet realize it or accept it. Second, the US aspiration to hegemony is a threat to itself and to others. Third, American society is collapsing. In my own neighborhood in New York, the gunfire has increased dramatically. Every week there is a new mass shooting. The country is deeply divided in many ways: white versus minority; college education vs high school education; urban vs. rural; native-born vs. foreign-born; high-tech versus low-tech. America’s technologically and economically advanced are along both coasts, which are equally socially progressive, more educated, and racially diverse. South America and the interior is in rebellion, suffering from declining incomes for less educated workers, lagging technologies, failing public services, racism and addiction to fossil fuels. We have two Americas, which probably need a partial amicable separation with a weaker federal government and progressive coastal regions left to fend for themselves.

During the last euro crisis, sovereign debt spreads soared in the periphery of the euro zone, including in Greece and Italy. We saw the same thing recently. Do you fear that a new debt crisis is imminent for many countries?

It’s possible. The key is to immediately end the war in Ukraine, immediately agreeing to non-enlargement of NATO and the lifting of sanctions against Russia in exchange for Ukrainian sovereignty and Russian military withdrawal. Otherwise, the European crisis will worsen – to experience the American neocon misadventure.

The new economic trend is “offshoring”, partly reversing decades of offshoring. Do you expect the fundamentals of globalization to be reversed due to rising global tensions and great power competition?

Not enough. Globalization will continue to intensify, but if we are not careful, in a dangerous and divided world. Take the recent G7 announcement of a new funding package for infrastructure in developing countries. The idea is good, but as usual, it was presented by the G7 as an initiative against China rather than a positive initiative. This is still the mindset of the United States – to divide the world so that the United States can rule at least part of the world. My advice to Europe is different. Live in cooperation with all regions, including China and, yes, even Russia. But act with caution, do not try to dictate to the rest of the world, but rather to cooperate with it. The main objectives of Europe should be peace, the success of the European Green Deal and the promotion of Green Deal in all other regions of the world!

Construction is expected to bring in 27 billion euros by 2026