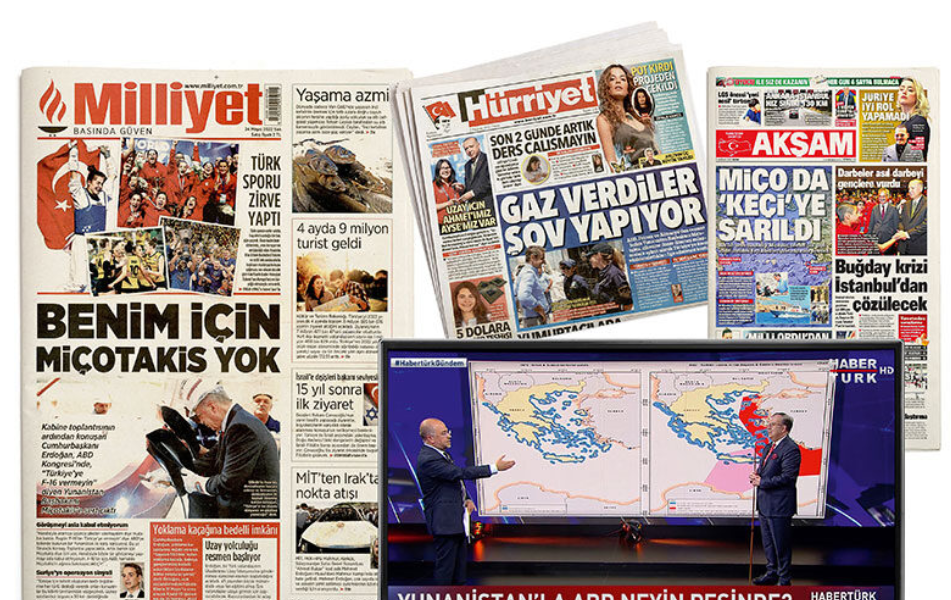 Erdogan was particularly angered that Mitsotakis, without ever mentioning Turkey by name, placed it squarely on the side of authoritarianism fighting democracy and got such a positive response in his speech at a joint session of the US Congress. Turkey’s president was also angered by what he saw as Mitsotakis’ intervention against the US sale of upgraded F-16 parts and new aircraft. It was shortly after that Erdogan said he would not speak to Mitsotakis again.

Turkish daily Hurriyet duly noted that Mitsotakis received 37 applause during his 42-minute speech to Congress. Turkish print and electronic media have duly amplified aggressive remarks by officials that focus on the Aegean islands’ supposedly demilitarized status. The coverage became even more intense when Mitsotakis visited the islands of Pserimos, Kos and Astypalaia. Officials and the media began discussing how these islands were ceded to Greece and Italy over 100 years ago and how Turkey might claim them, supposedly because the terms of the assignment have been violated. A Turkish television crew has tried to approach Pserimos under the pretext that its sovereignty is disputed, in a way reminiscent of the coup staged by the Turkish media in 1996 by planting a Turkish flag on one of the islets of Imia.

Turkish Minister Mevlut Cavusoglu gave an interview to Anadolu Agency threatening to challenge the sovereignty of the Greek islands if Greek troops did not evacuate them. In more than one TV show, maps have been deployed to supposedly prove how Greece is ‘the instrument of foreign powers’ trying to ‘encircle’ Turkey. The Treaties of Sèvres (1920) and Lausanne (1923) are dissected in a way that has little to do with their actual content. And it’s no surprise that rebuttals from Greek officials, including Mitsotakis and Foreign Minister Nikos Dendias, barely deserve a mention.

The “encirclement” theory has been a Turkish obsession for decades, often as a kind of lament for the demise of the Ottoman Empire. But there is renewed emphasis on it, as well as the theory of “grey areas” or disputed sovereignty zones in the Aegean – coincidentally, like Tansu Ciller, Turkey’s first and only female prime minister, who strongly promoted “grey areas”. theory in the 1990s, is attempting a comeback with Erdogan’s blessing.

Political analysts say the media preoccupation with Greece and Syria is serving to divert attention and distract from the dire state of Turkey’s economy, with inflation at a 25-year high and the lira losing constantly value issues that could hurt Erdogan’s re-election bid. a year from now.

And while this propaganda is strictly for domestic consumption, experienced analysts point out that similar rhetoric predated both the 1974 invasion of Cyprus – triggered and made possible by a coup staged by the Greek dictatorship of the time – and the occupation of one of the two Imia islets, in 1996.

The juvenile disrupts the household; a woman is injured by stabbing a vehicle; multitude of domestic conflicts and mental health problems – Your Local News