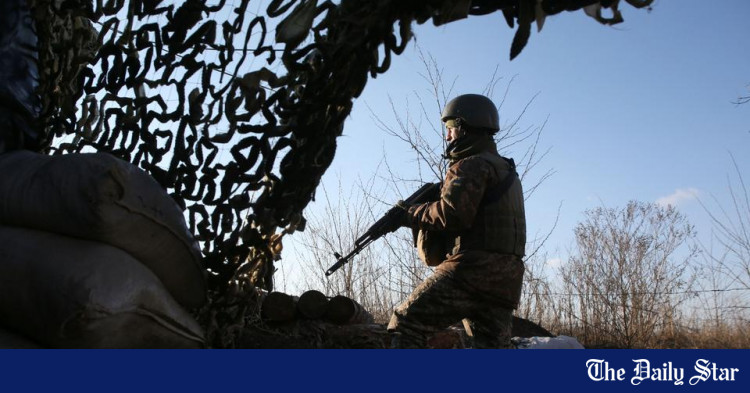 Ukraine’s military reported the first death of a soldier in weeks on Saturday and blamed Moscow-backed rebels for a sharp escalation in attacks that have heightened fears of an imminent Russian invasion.

The Joint Military Command for Eastern Ukraine said a soldier was fatally injured by shrapnel in the conflict zone that crosses two breakaway regions near the Russian border.

For all the latest news, follow the Daily Star’s Google News channel.

Ukraine’s emergency services said two of their employees were injured in a wave of attacks on Friday.

The armed forces said the rebels had used 82-caliber and 120-millimeter mortar shells – banned under previous ceasefire agreements – in frontline towns crossing the eastern regions of Lugansk and Donetsk.

“In this way, our enemy is trying to force our armed forces to retaliate and then blame them for bombing civilians,” he said.

The army added that it continued to “repel and contain armed aggression” without attacking civilians, and accused Russia of directing its allies’ attacks.

Moscow formally denies being involved in the conflict and describes it as an internal Ukrainian affair.

But observers from the European security body OSCE have reported regular shipments of Russian weapons across the border throughout the eight-year war.

The OSCE reported 870 massive ceasefire violations in the conflict zone in its latest report on Friday, which referred to incidents in previous days.

“Over the past few days, the OSCE Special Observation Ukraine (SMM) observed a dramatic increase in kinetic activity along the line of contact in eastern Ukraine,” the OSCE said. in a press release.

The rebel leaders accuse the Ukrainian armed forces of having tried to take back by force their two separatist regions, which Kyiv denies.

The rebel leaderships in Donetsk and the small Lugansk region on Saturday described the situation as “critical” and announced “general mobilization”.