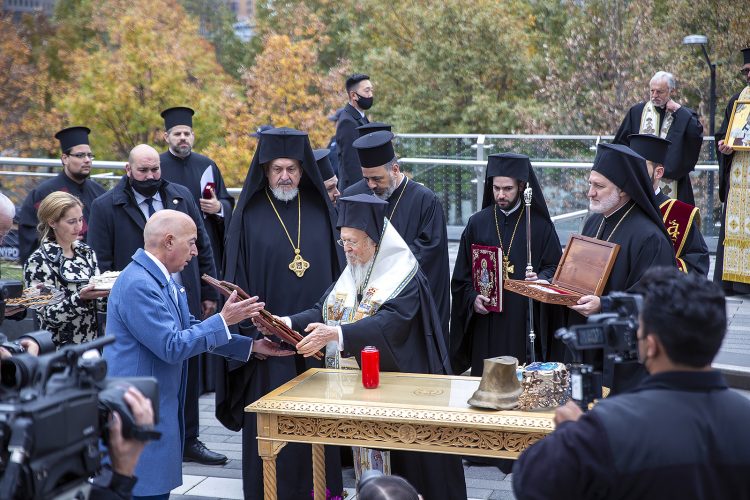 Weirton is part of the project to build a new sanctuary in New York | News, Sports, Jobs

Ecumenical Patriarch Bartholomew leads the official opening ceremony for the doors of the Greek Orthodox Church of St. Nicholas in Lower Manhattan on Tuesday, November 2, 2021. The former St. Nicholas Church was the only place of worship destroyed in the terrorist attacks. September 11th. crushed under the collapsing south tower. (AP Photo / Ted Shaffrey)

WEIRTON – The reconstruction of the only house of worship destroyed in the terrorist attacks of September 11, 2001 has a connection to the Ohio Valley.

St. Nicholas Greek Orthodox Church and the National Shrine are under construction in the World Trade Center area.

According to its website, the original St. Nicholas Greek Orthodox Church was founded in 1916 in a small row house that had been used as a tavern. Greek immigrants from Lower Manhattan bought the Cedar Street building in 1892 to use it as a community house, making it one of the first stops for Greeks arriving in America.

It stayed in one place for 85 years, thanks to the growth of the city’s financial centers and the development of the original World Trade Center complex in the 1960s.

The church was destroyed on September 11, 2001, with the collapse of Tower 2, with only a few relics recovered.

Eventually the decision was made to rebuild on the nearby Liberty Street property.

Michael Psaros, originally from Weirton and living in New York, has been part of the project for several years.

“The initial effort ran out of money in 2017” Psaros explained during a recent trip to Weirton as part of the apostolic visit of His All Holiness Bartholomew, Archbishop of Constantinople-New Rome and Ecumenical Patriarch.

Psaros is vice president of the Friends of St. Nicholas, a private entity established in December 2019 to work in cooperation with the Greek Orthodox Archdiocese of America as part of the ongoing efforts to raise the funds needed to build the church and sanctuary.

Designed by Spanish architect Santiago Calatrava, the new church, Psaros explained, will look like Hagia Sophia, also known as Hagia Sophia, in Istanbul. He said the shrine will be a “American Parthenon” as the most visible symbol of the Greek Orthodox faith in the United States.

As it will be located in the World Trade Center complex, St. Nicholas is designed as a place for visitors to the National 9/11 Memorial and Museum to pray, reflect and seek comfort, within the church and in a center. of non-denominational mourning.

“We will be the most visited church in New York”, said Psaros.

With a large domed roof, the design of the church includes tributes to the rescuers lost on September 11.

Psaros was among those in attendance on November 2 as Ecumenical Patriarch Bartholomew led the official opening ceremony for the church doors.

The service included the blessing of a twisted bell and a torn icon honoring the Virgin Mary, both found in the rubble of the original church, according to the Associated Press.

“We are here today on this sacred grounds of the World Trade Center, where the world changed in a cruel and terrible time 20 years ago,” Bartholomew said, according to an Associated Press report. “This sacred ground of the American experience is where the Orthodox Christian faith will take the initiative to demonstrate to the world that good is more powerful than evil, that there is life beyond death and that love will always triumph over hate. “

In addition to the opening ceremony for the doors, church officials held an inaugural lighting ceremony for the building in September, with interior lights designed to illuminate thin panels of marble, which were said to have been extracted from the same. vein in Greece used in the construction of the original Parthenon in Athens.

The church and shrine should be completed in time for Easter, Psaros said.

More information about the church and the shrine can be found online at https://stnicholaswtc.org/

The latest news today and more in your inbox