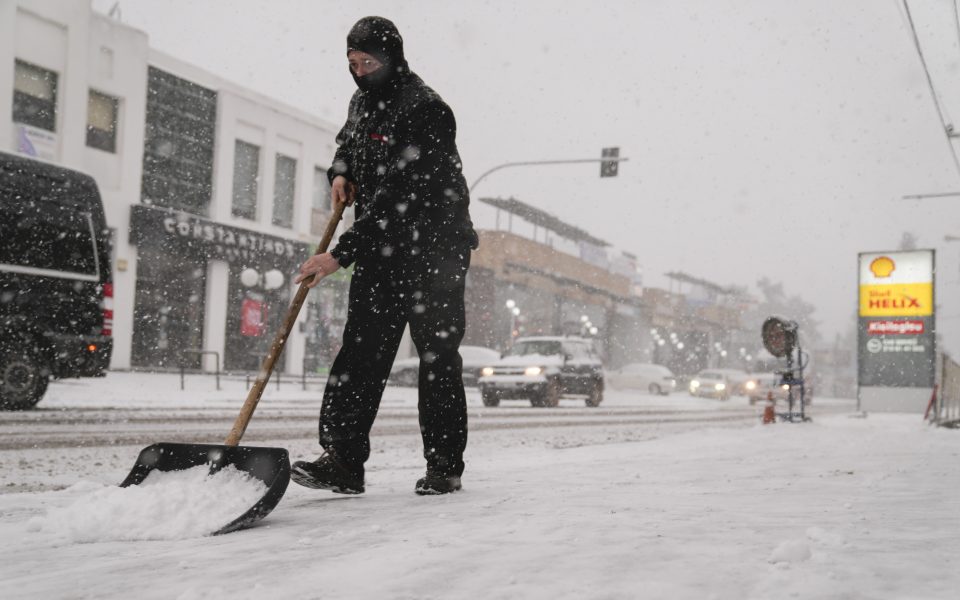 A man shovels a sidewalk in Agios Stefanos, north of Athens, on Monday. [AP]

I’m Greek. I’m really happy to say that. I have lived here for a few years. I am a Greek citizen, I pay taxes here like everyone else, I own land and I wouldn’t want to live anywhere else. I can say that I love Greece passionately.

However, I have a few thoughts, highlighted by the recent snowfall, this colossal blizzard. We ruminate in unusual times, in times of sudden climatic catastrophe, fires, floods, heavy snowfalls, pandemics.

That’s what happened. I woke up Wednesday morning, a full day or so after the snow stopped. I put on my wonderful new snow boots that were sold all over Athens, an Athens that was preparing for snow. In fact, the weather was correctly predicted by meteorologists. I took my shovel and walked towards my street which, by the way, is a main street in Papagou. It is even called an “avenue”.

I saw a lone walker and asked her, “Where is everyone?”

It was 10 o’clock in the morning! Where are my neighbors who should shovel the snow on their sidewalks, clear their olive and orange trees, the trees they love so much? Where are the young people, the teenagers, the volunteers or those who ask for a few euros to clear the sidewalk? I myself have done this. I was surprised to be completely alone in the street.

Right now, in my neighborhood in Washington, DC, in the areas where I was born and where I grew up, the streets would be full. Neighbors would be everywhere, with their children, cleaning up. In fact, it’s a law in almost every city in the United States and other countries as well. And I quote:

“DC homeowners who don’t clear their sidewalks and cut snow within 24 hours of a snowstorm face fines of $25. The fine is $150 for companies that do not remove snow within eight hours of the day.

“Owners of residential property aged 65 or over, or people with disabilities, are exempt from the law. Volunteers will be on call to shovel for these residents,” etc.

A friend of mine rightly pointed out that Americans do this because they actually own the land in front of their house, that little meter of space. But still, what about civic duty? What about the sense of community? Working together as a neighborhood?

I remember another example. Years ago, as my husband and I were sadly glued to television news about another wildfire, a tragic image emerged. An elderly lady looked up at the sky above her, where there was a helicopter hovering and about to douse what it could. The poor woman was furious, her fist pointed at the helicopter, shouting, “Why aren’t there more helicopters?” What are you useless people doing? Where is the state?

Turning to my husband, I asked what their village’s plan was for such fires. What plan has the town hall drawn up? Where was the “neighborhood action group”? My husband just laughed.

There is no criticism in my thought. And, in fact, Americans are hardly the most effective in times of disaster. But I must say that in all the countries where I have lived, the United States, Indonesia, Australia, I have never heard so many people complaining about “the state” as the Greeks.

At some point, I would like my compatriots to reflect on the following:

Are we not also the State?

Tenia Christopoulos is the author of “Lords of the Dance”. She’s a Washingtonian who lives in Athens.